Travels with Lorenzo (in honour of Shakespeare's birthday)

A few years ago, when The Ghostly Father was still very much at the first draft stage, Better Half and I had a holiday in northern Italy.  During that trip we visited Venice, Verona, and (very briefly) Mantua, seeking out the places where parts of the story are set.

When we learned that the book was going to be published, we promised ourselves that we would go back.  The project, which became known as "Taking to Lorenzo to Verona," finally came to fruition at the beginning of this month.

The trip started off on a rather shaky footing, involving an incident at the airport which I've described elsewhere (details here, for anyone who might have missed it).  But the trip itself, despite slightly indifferent weather and a 24-hour vaporetto strike in Venice the day after our arrival, was most enjoyable.

Here, then, are a few photos of Lorenzo, the eponymous hero of The Ghostly Father, in his natural habitat. 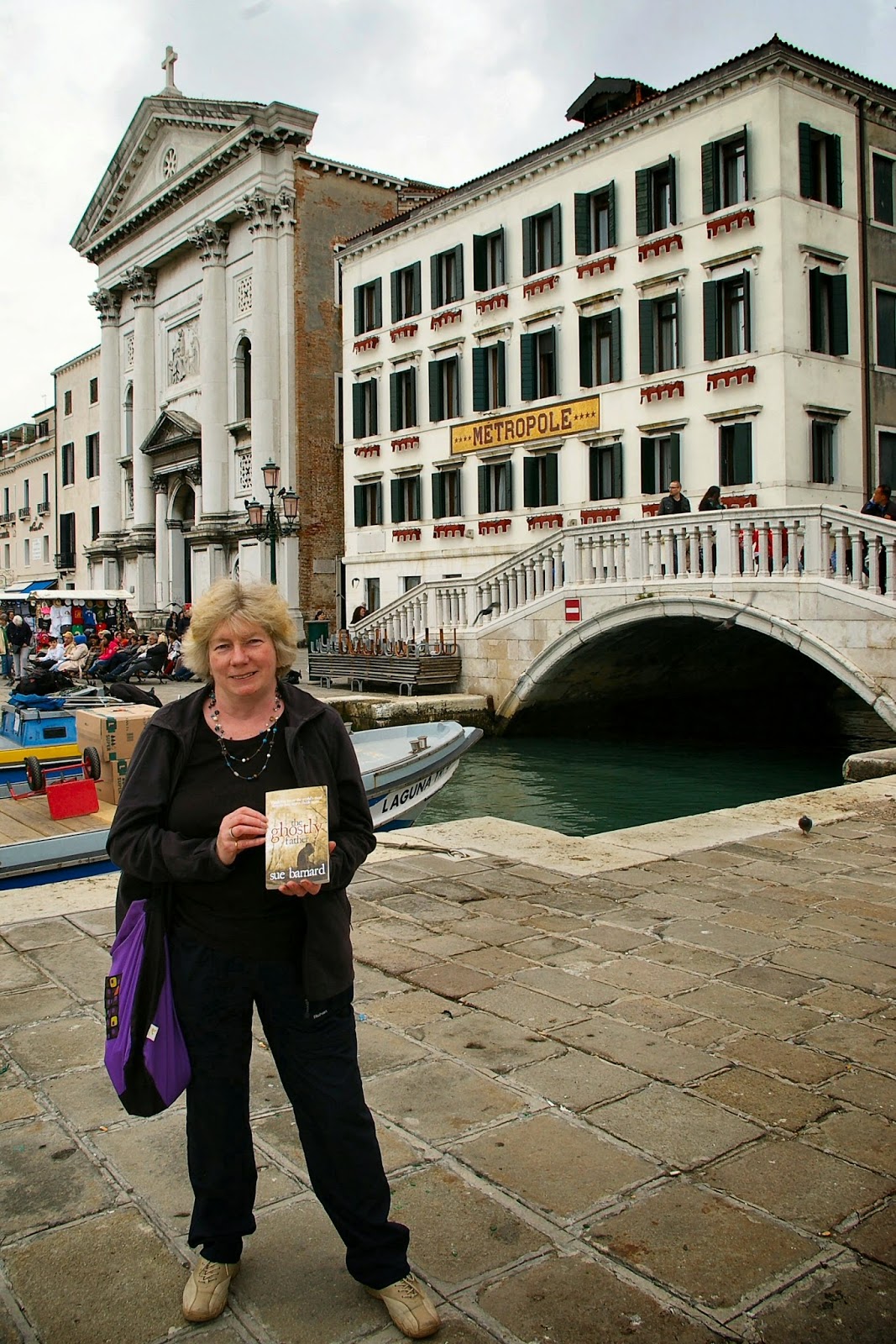 The building which was once the Ospedale della Pietà orphanage, made famous by the composer Antonio Vivaldi, is now the Metropole Hotel.  Looking at its grand status today, one would never guess at its original purpose - apart from one clue which can still be seen, tucked away in the passageway which runs between the hotel and the church: 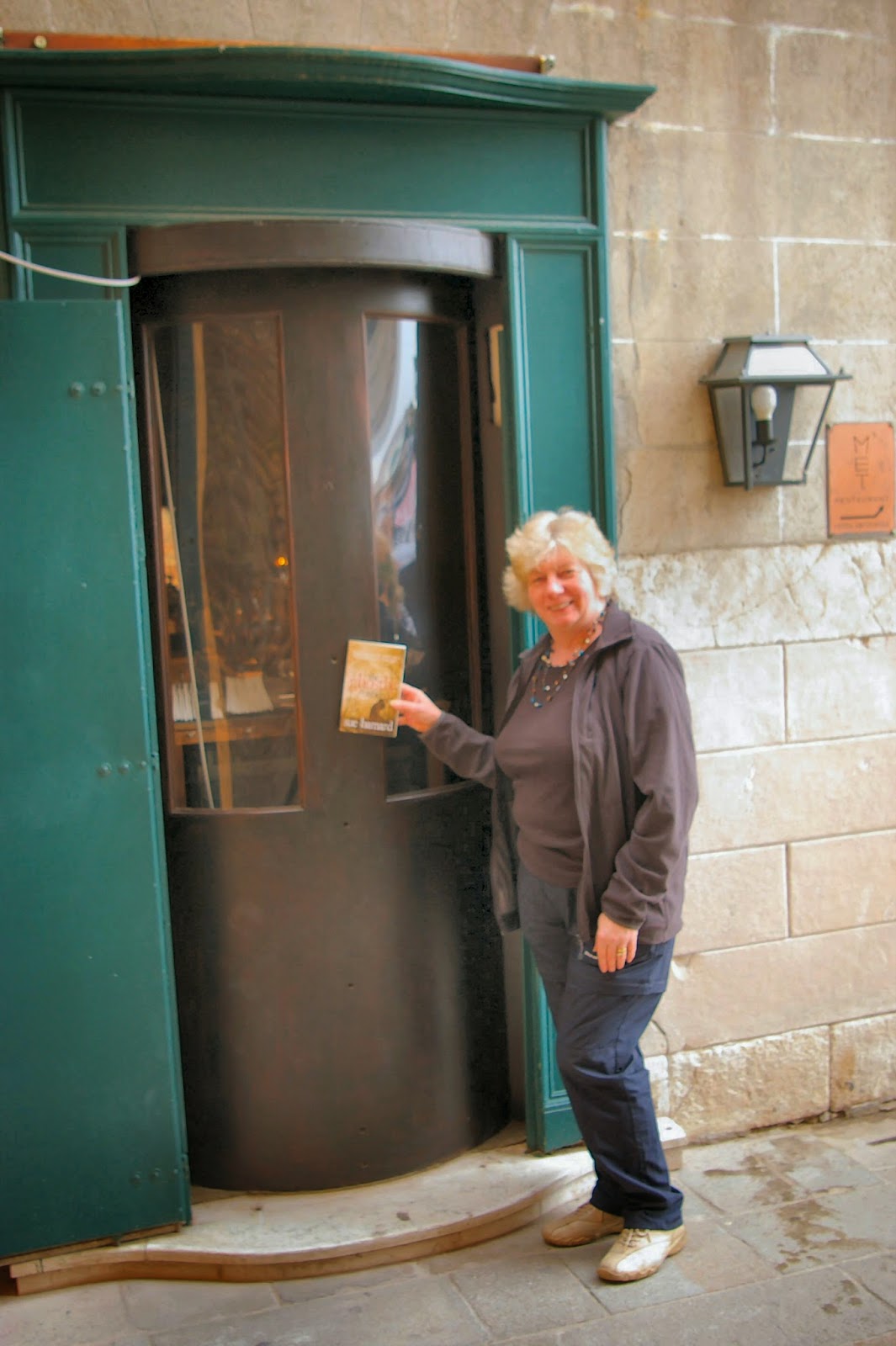 This strange curved wooden doorway is what used to be the ruota dei trovatelli - the turning-wheel where unwanted babies could be left, anonymously, to be cared for by the nuns who ran the orphanage.


The eighteen-year-old Lorenzo becomes a friar in Venice.  Some years later he leaves Venice... 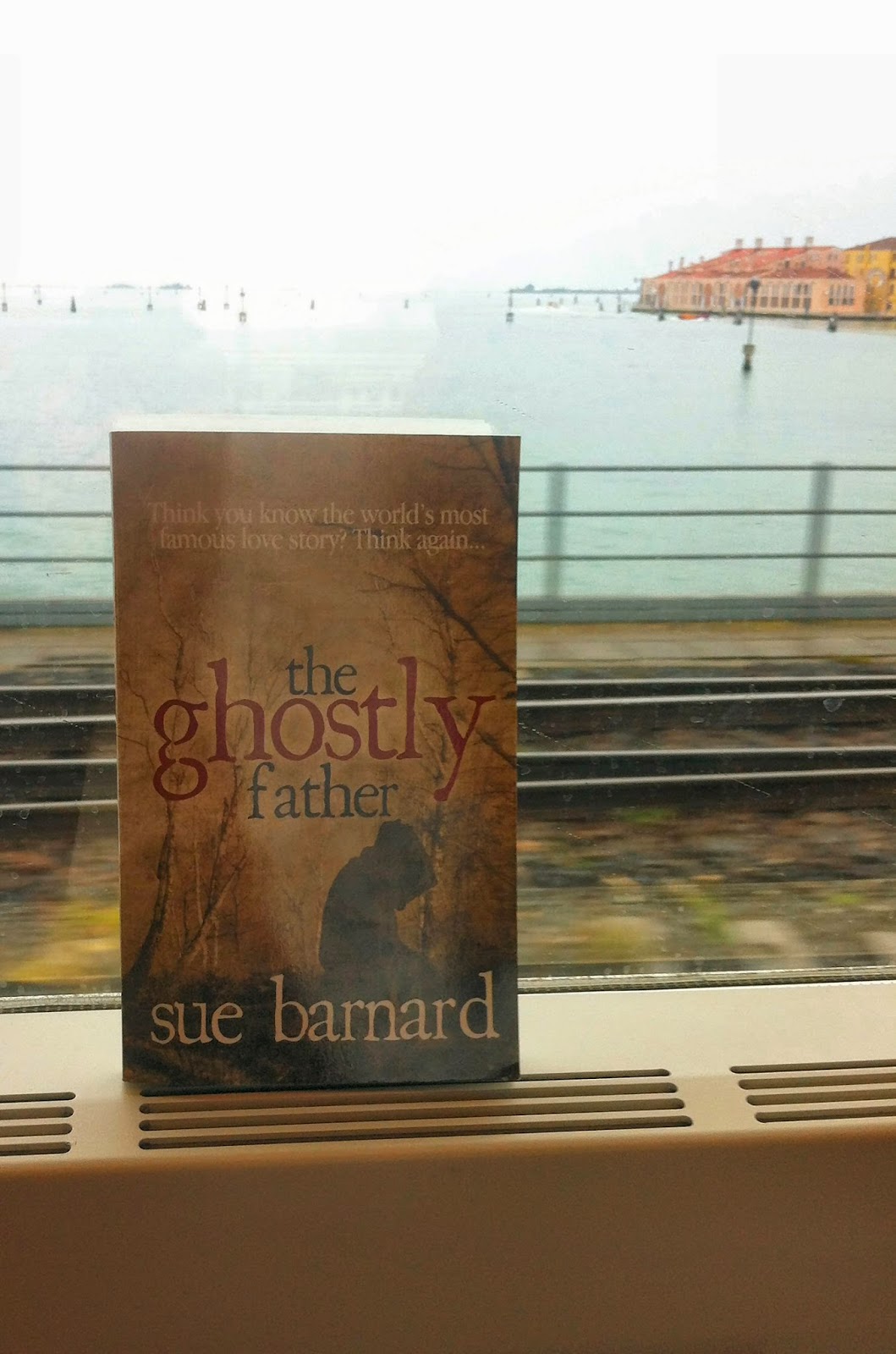 (Yes, he is travelling on the causeway, even though it wasn't built at the time when the story is set...!  But then, even the mighty Shakespeare didn't always get it completely right...) 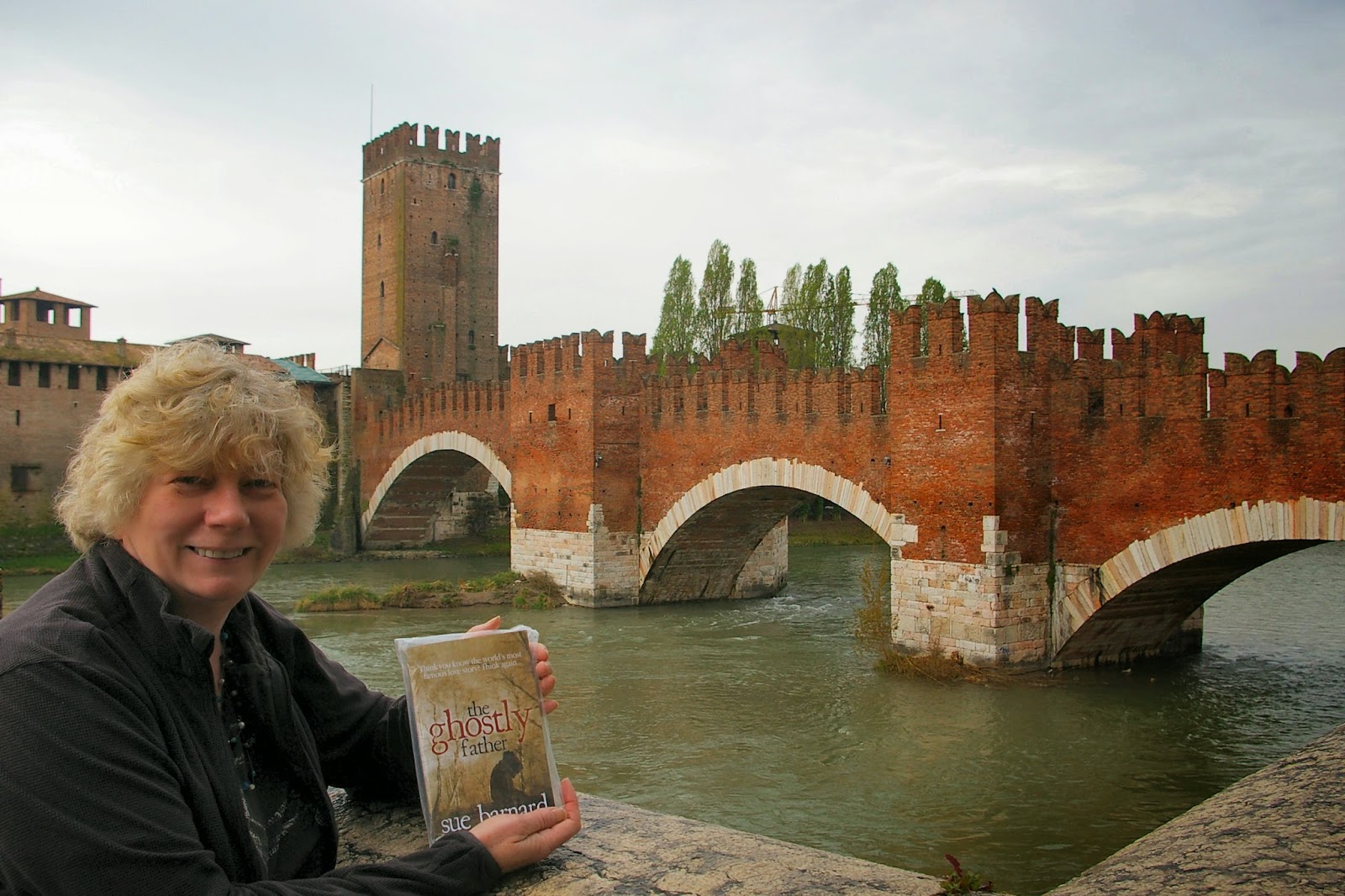 ... and helps to establish a new Franciscan friary in the city. 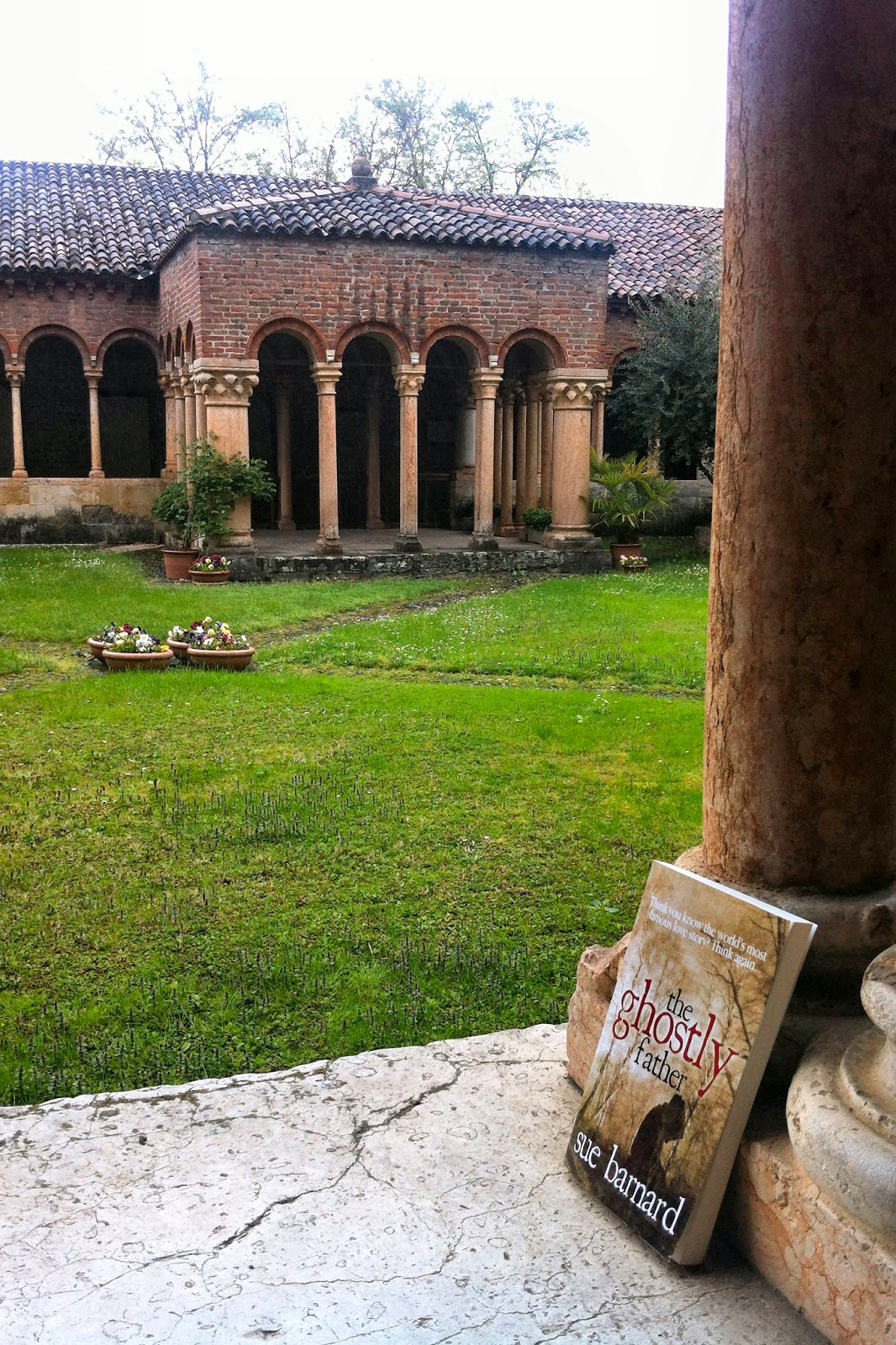 This is the cloister of the Basilica of San Zeno - very much how I envisage Lorenzo's new home.

And it isn't long before Lorenzo's path crosses with that of Romeo and Giulietta. 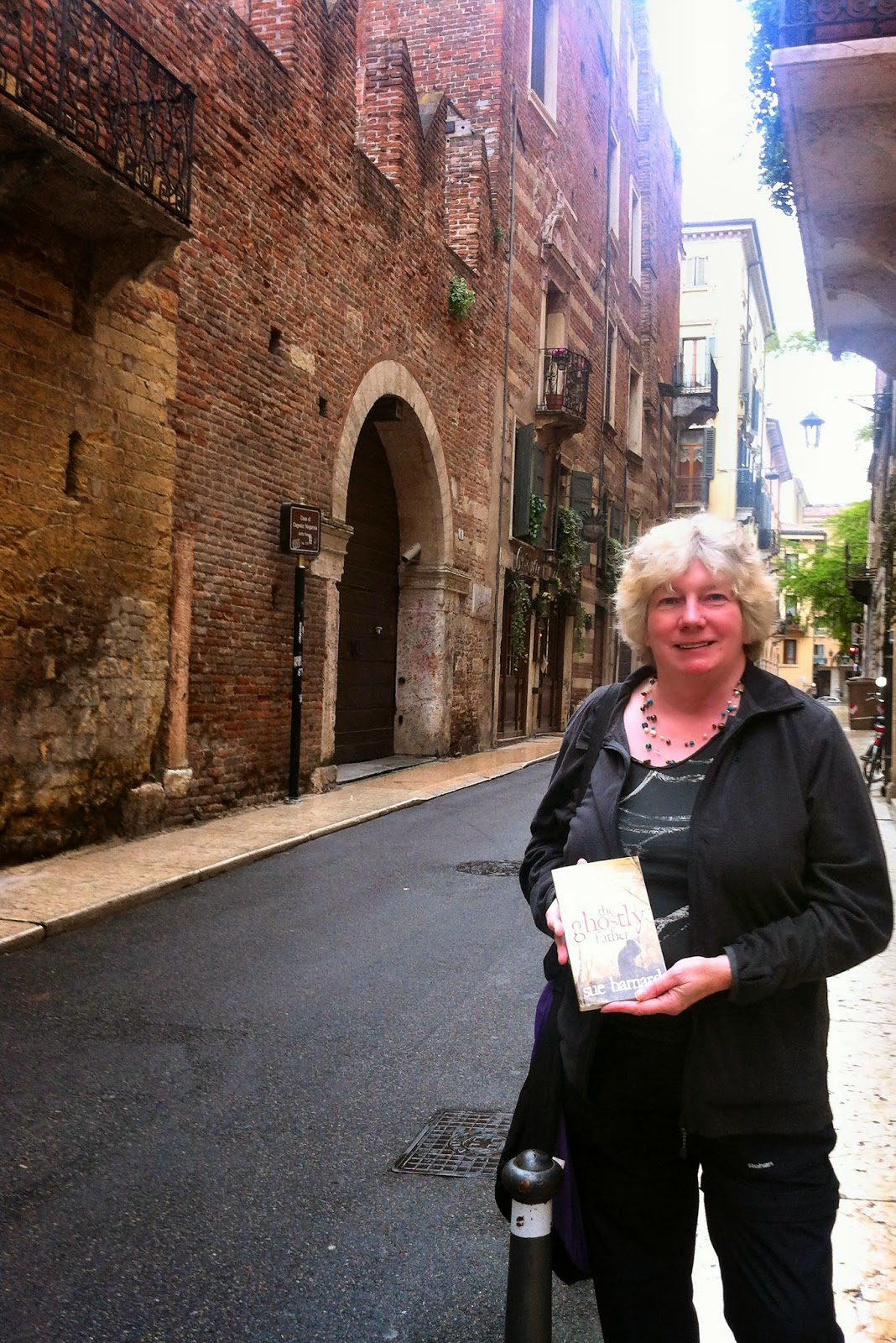 The building on the left of this picture is known as the Casa dei Montecchi - the House of the Montagues.  It's now a restaurant. 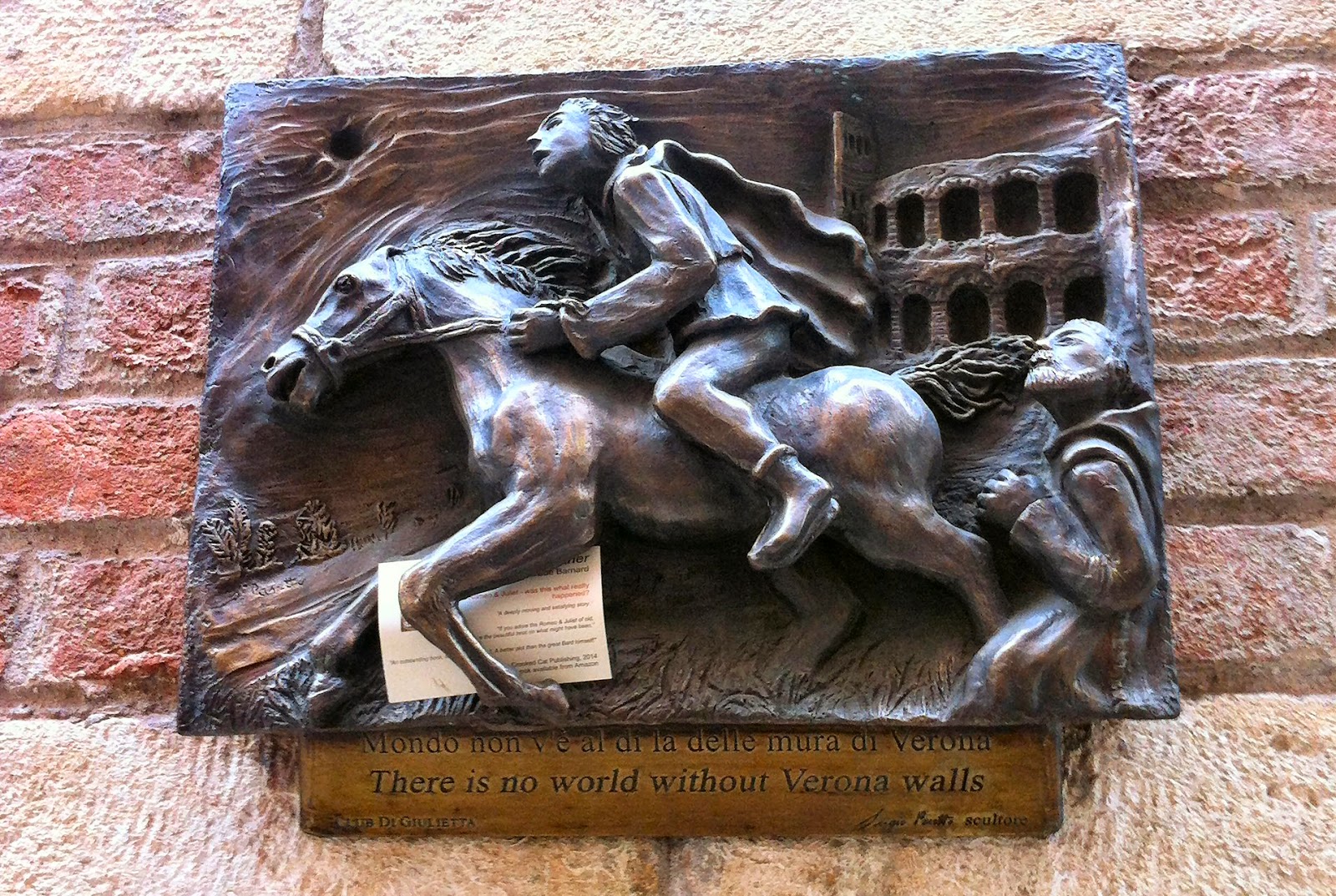 This bronze plaque of Romeo fleeing from Verona after his banishment is on the wall by the restaurant door.  The card tucked behind the horse's foreleg is an impromptu advertisement for the book!


The Casa di Giulietta (Juliet's house) is a much higher-profile place, attracting thousands of visitors every year. 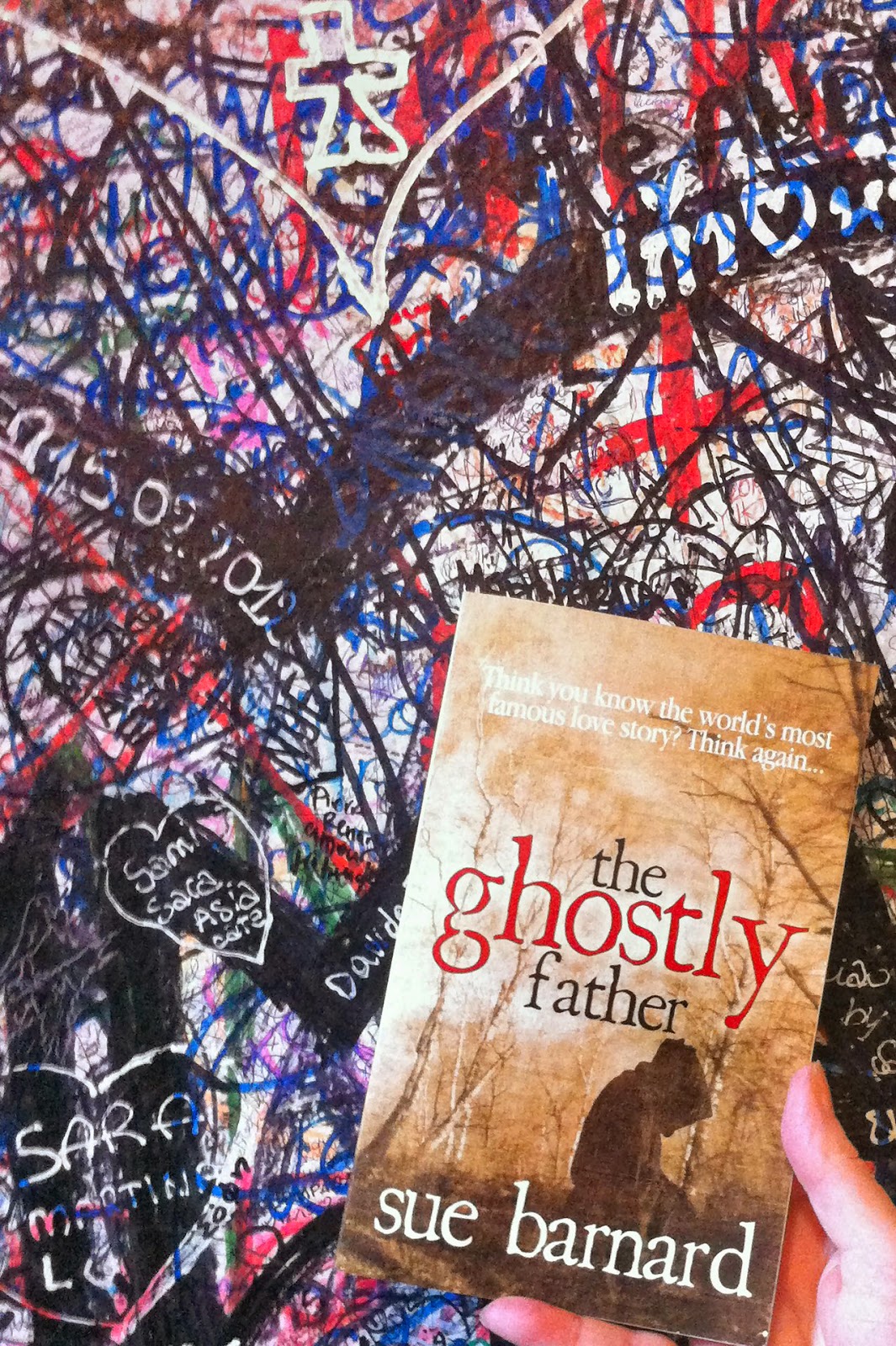 "The walls of the passageway leading from the street into the courtyard are covered from top to bottom with swirling multicoloured graffiti."
(The Ghostly Father)

"The interior of the house is tastefully decorated and pleasantly cool and quiet, and although the attraction is a modern invention, it is not difficult to imagine how the Capuleti family might have lived."
(The Ghostly Father) 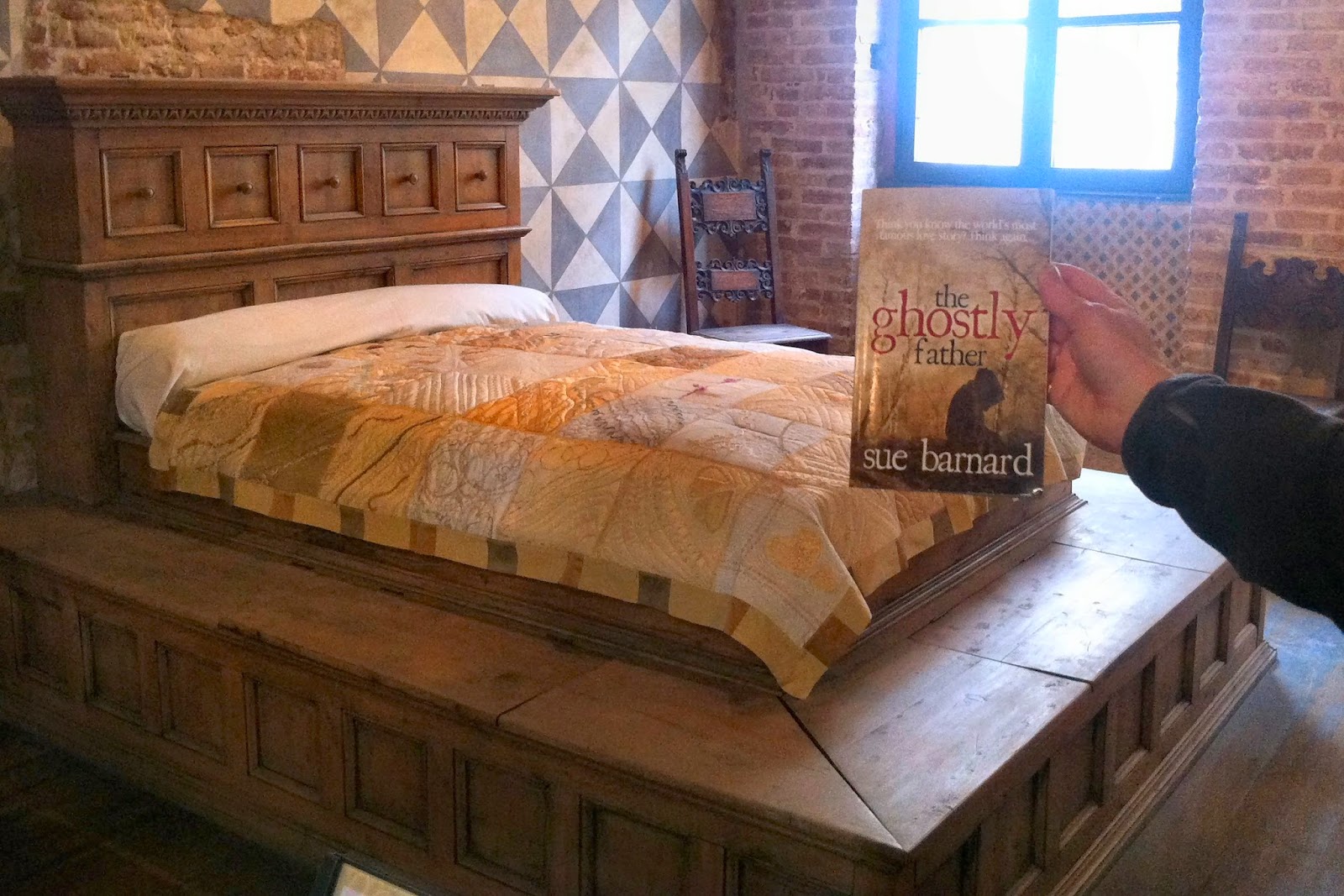 This bed is the one which was used in the 1968 Zeffirelli film.


Throughout the house, the story of Romeo & Juliet is told on a series of these boards: 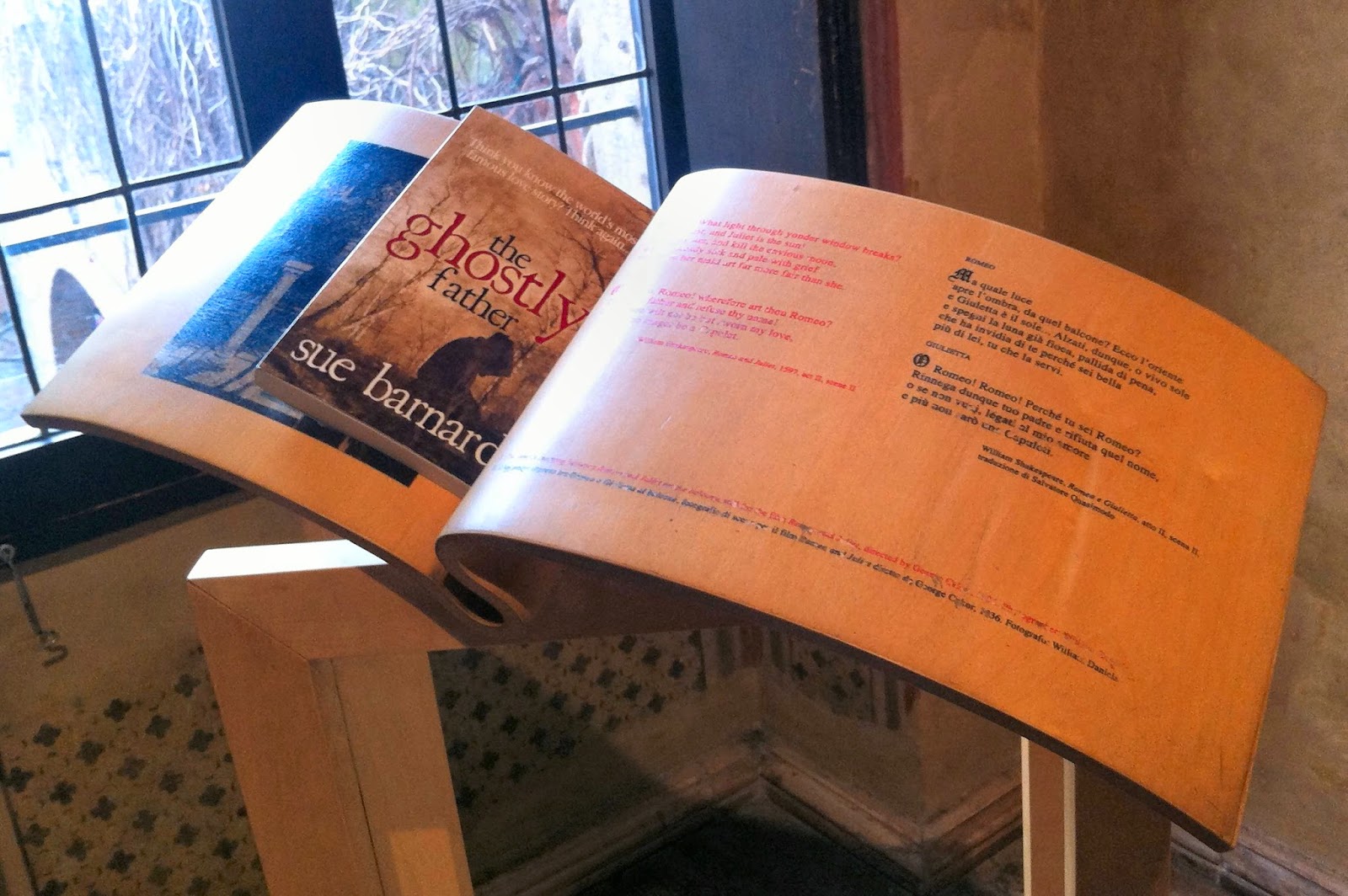 Outside in the courtyard, visitors are encouraged to buy a padlock from the gift shop, inscribe it with their names, and attach it to the fence alongside the statue of Juliet. 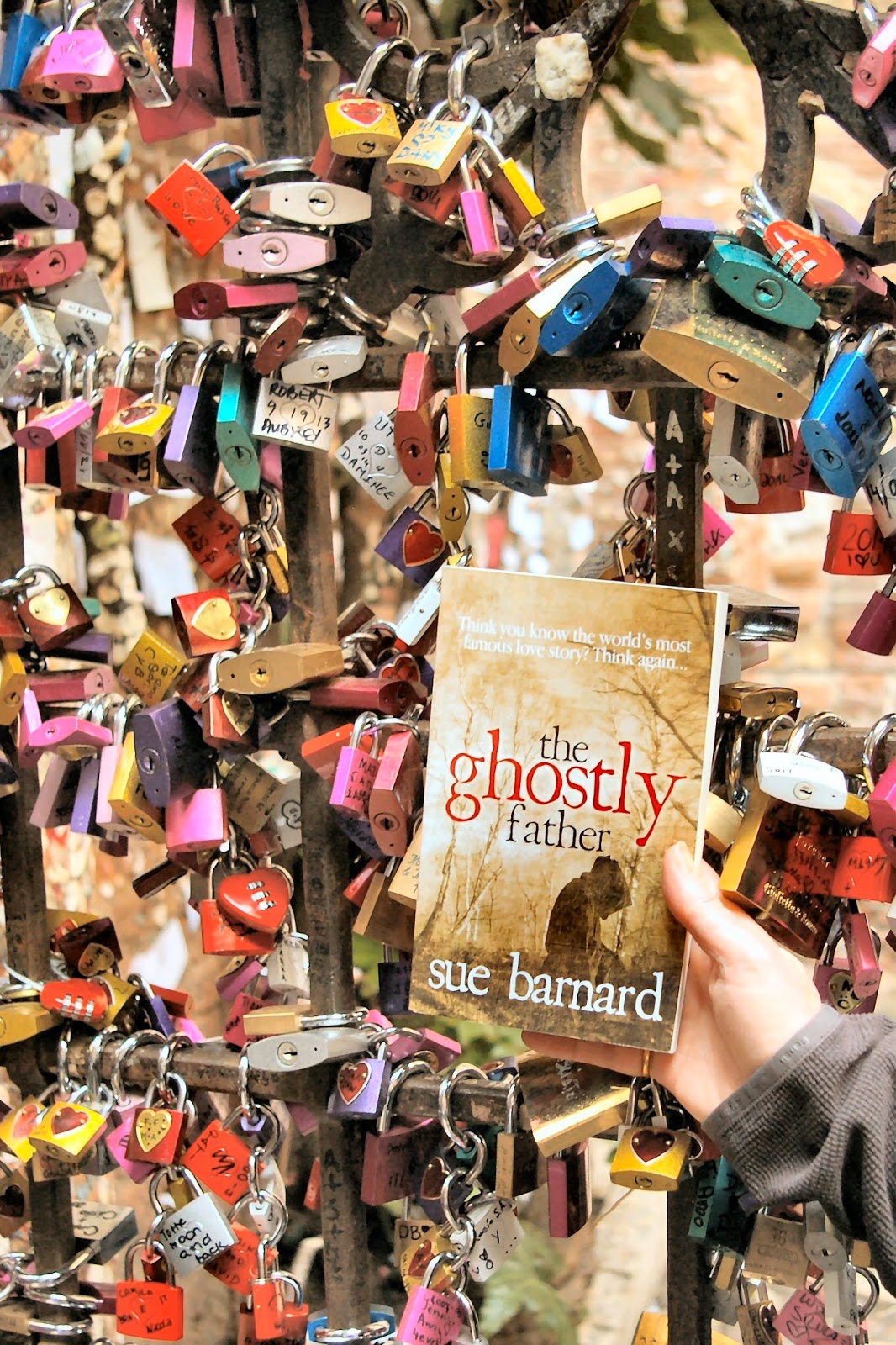 We were tempted, but instead settled for something we could bring away with us - a pair of interlinked wristbands. 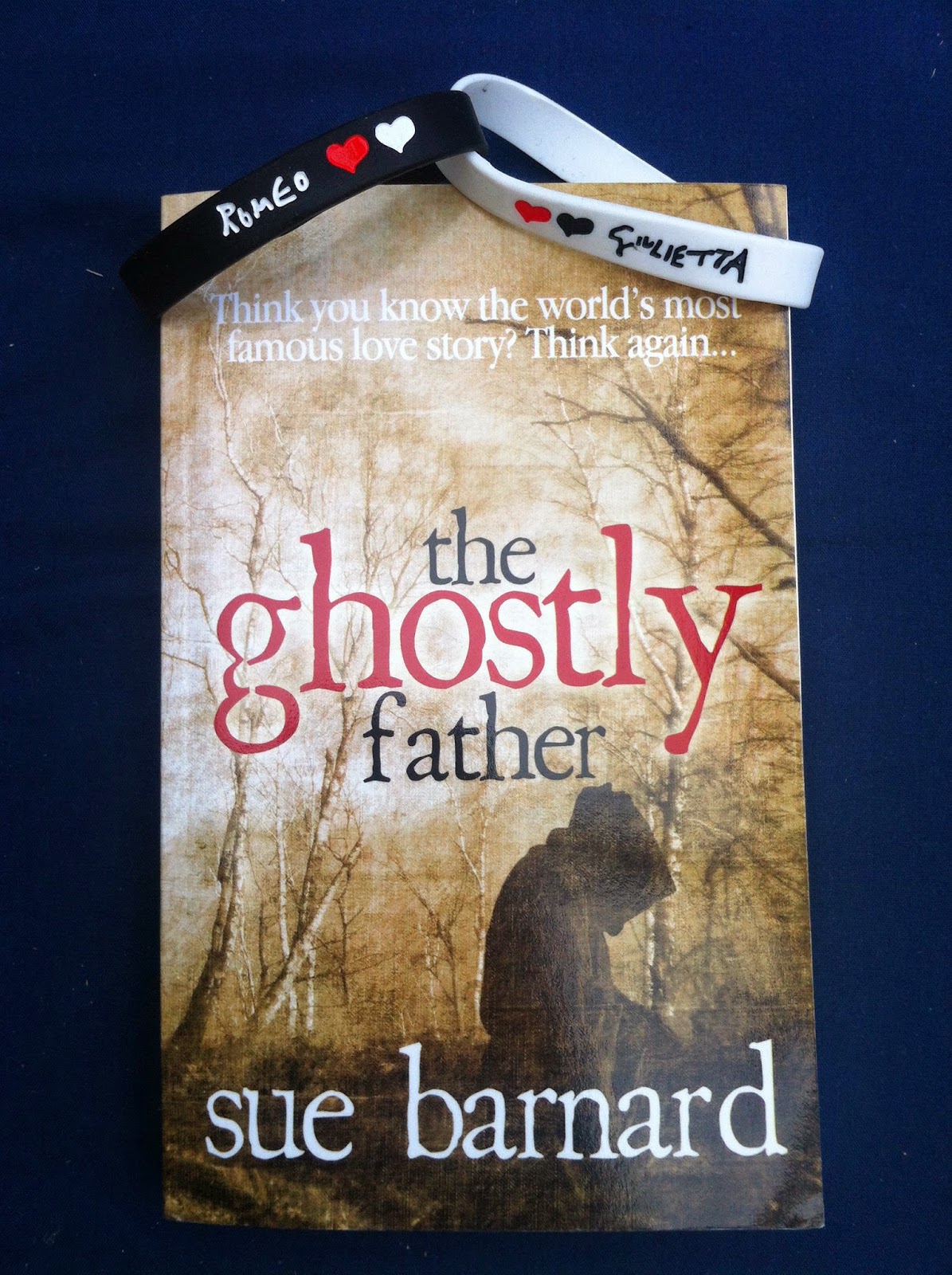 This is Juliet's tomb - the place where, in the original story, the Friar's plan goes so horribly wrong: 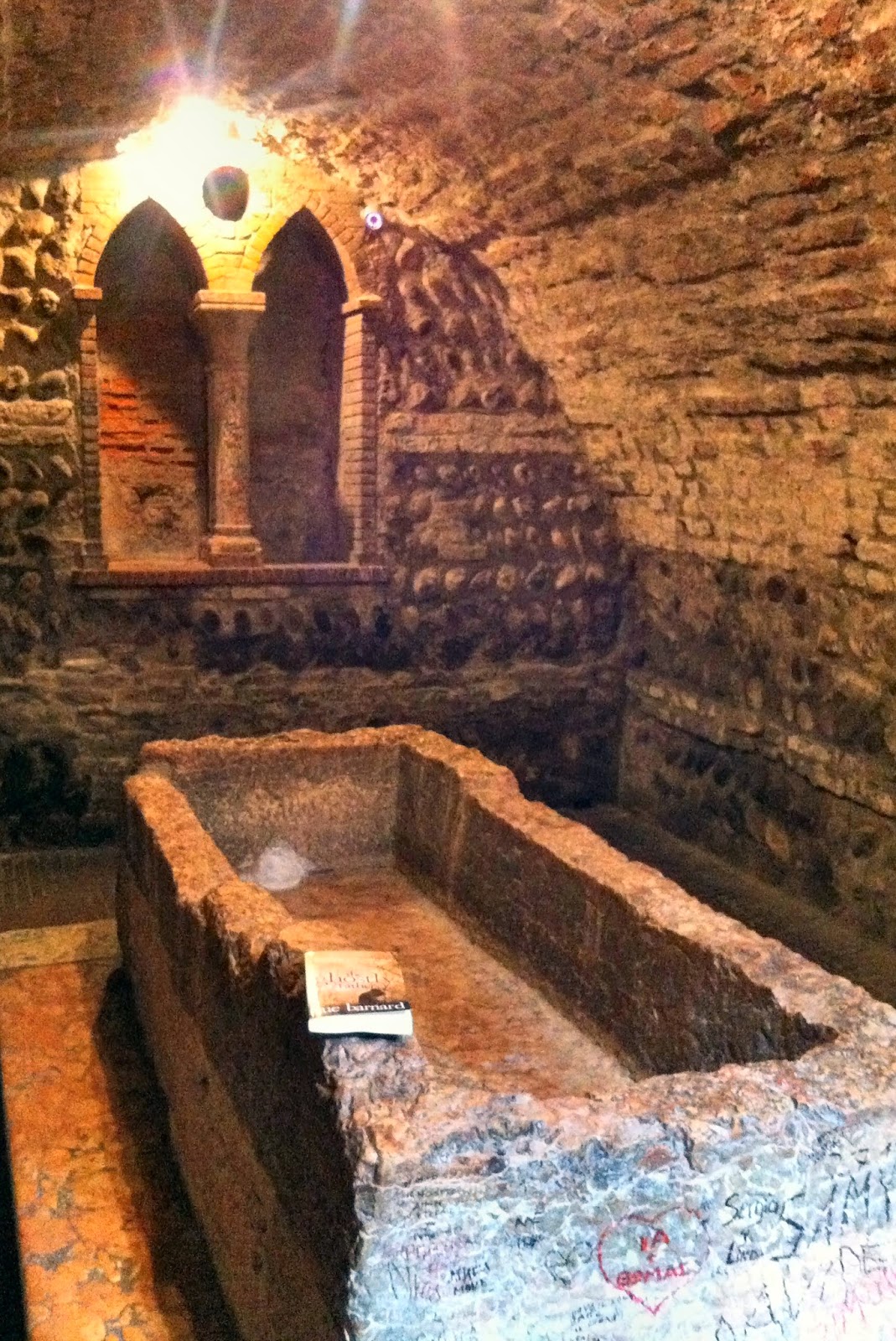 And here is Lorenzo, with Verona's own tribute to the great man who provided the inspiration for the book.  Happy birthday, Will! 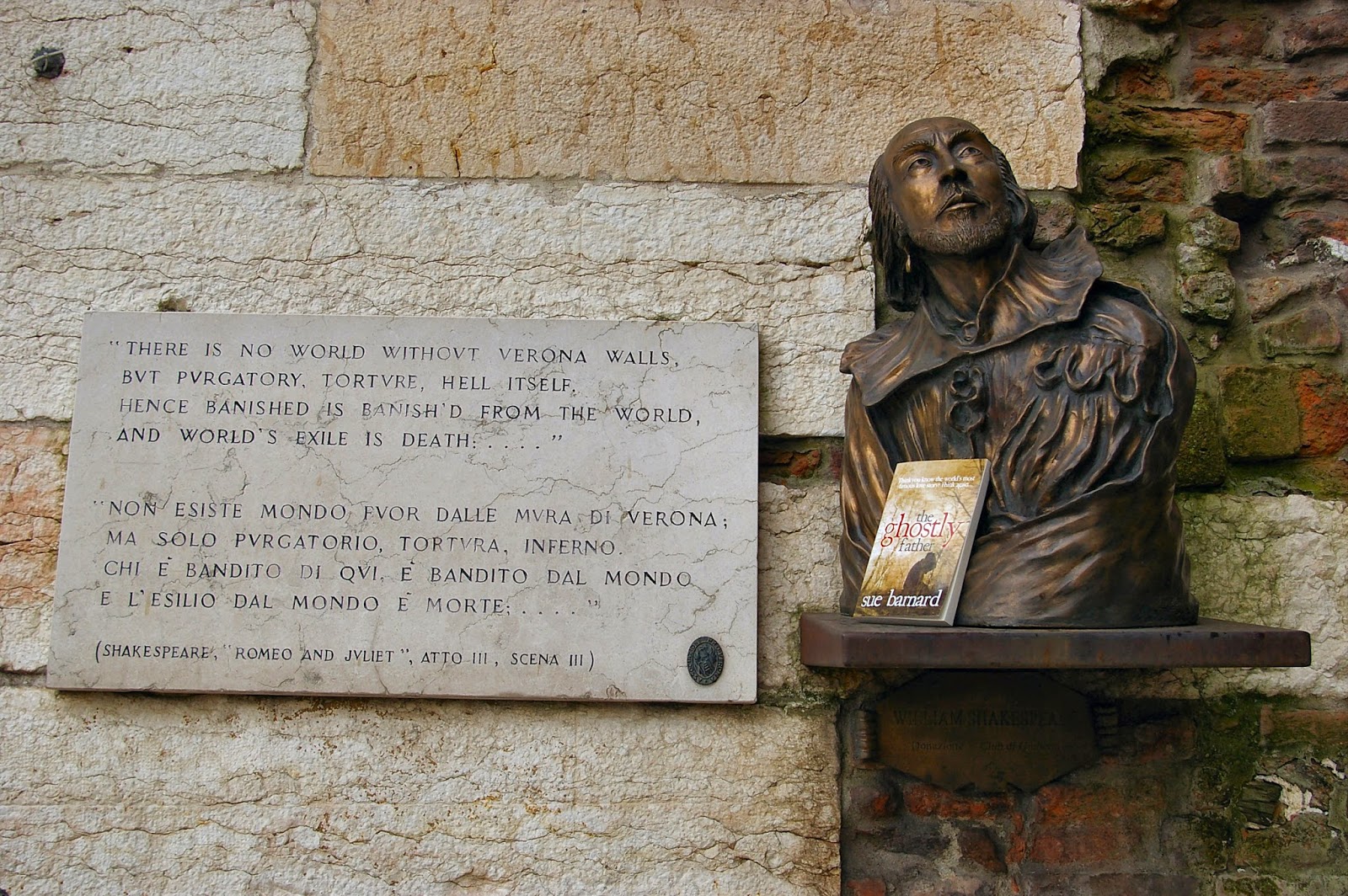 Posted by Broad Thoughts From A Home at 16:02