I AM WITH YOU IN SPIRIT - a short story for Christmas

Miss Blythe, with her twinkly eyes and her wicked sense of humour, was an integral part of our Christmas past. She’d lived in the house across the road for as long as I’d been able to remember, was of indeterminate age, and had no relatives.  And as far as I could tell nobody even knew her first name, let alone anything about her past history. My Mum, whose natural generosity of spirit could never entertain the idea of anyone spending Christmas alone, always invited her to join us for Christmas dinner.

Miss Blythe was intensely grateful, and repaid Mum’s kindness in her own inimitable way. Her witty conversation was a joy as we munched the turkey and pulled the crackers.  She even managed to make the jokes sound funny.  And – as one might expect from a retired English & Drama teacher – she was an absolute whizz at Charades.  I leave you to imagine how she portrayed Nicholas Nickelby; suffice it to say that I was jolly glad I didn’t have to face her in class afterwards. She would always bring us a delicious home-made Christmas cake, together with a bottle of a strange dark purple liquid which, unfortunately, looked and smelled exactly like cough mixture. And sadly, the resemblance didn’t end there. 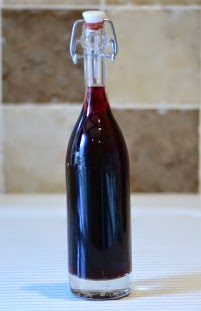 The bottle was labelled, in her neat italic handwriting, “Blythe Spirit” – and the liquid was, she explained, home-made damson gin, made to her grandmother’s secret recipe. When the cake was cut we would all dutifully force down a small dram of the syrupy jungle-juice and collectively try not to wince. Miss Blythe, for some reason which we could never quite fathom, always downed hers in one gulp. The remains of the brew were then discreetly disposed of on Boxing Day. When we saw how effectively it cleaned the toilet (killing 99% of all known germs and leaving the other 1% too intoxicated to bother), we could only begin to wonder what effect it might be having on our own internal plumbing. But for Miss Blythe’s sake, we continued to pretend that we liked it.

Then, in April of last year, Miss Blythe had a fatal stroke. It was mercifully quick – the results of the post-mortem suggested that she’d probably been dead before she hit the floor – though (as is always the case with sudden death) it left the rest of us pretty shell-shocked. But that was nothing compared to the further bombshells which were to follow. We were amazed to discover that she was almost ninety, that she was a devout Roman Catholic, and that her name was Bernadette. And it transpired that apart from a modest bequest to her church, she’d left everything to Mum.

Sorting out her stuff brought home to us just how little any of us knew about her. Indeed, it was the first time that we had even ventured beyond her front door. Once inside her house we tiptoed around and spoke in whispers, as though we were invading some kind of sacred shrine. And so it proved. On her bedside table, next to a black Bible and a rosewood rosary, stood a faded black-and-white photograph of a handsome young fellow in naval uniform. As Mum cautiously picked it up, the back of the frame came away in her hand. Tucked behind the photograph was a ruby ring and a small yellow envelope – a telegram telling of the young sailor’s death at Dunkirk. Miss Blythe would have been about twenty at the time.

It was whilst we were clearing out her cellar that we came across the two boxes, each containing twelve bottles of Blythe Spirit. None of us can remember how they subsequently ended up in our own cellar. Perhaps Mum had in mind to use the stuff as toilet-cleaner when we ran out of Domestos.

Christmas dinner last year was a much more low-key affair. The familiar conversation over the turkey seemed stilted and mechanical, we didn’t bother with crackers or Charades, and the Christmas cake came from Waitrose. A deafening silence descended as Mum half-heartedly reached for the knife to cut it. Then I heard myself say (in a voice that was clearly not my own), “What about the Blythe Spirit?”

For a long moment nobody moved – then a bottle was duly brought up from the cellar and hastily dusted off as the small glasses were once again filled up and handed out, and the contents forced down. This time there was no need to hide our distaste for the stuff – but as we collectively grimaced, the atmosphere of doom and gloom evaporated. And Miss Blythe, in our minds’ eyes downing her dram in one, was present again. The party was complete.

Posted by Broad Thoughts From A Home at 10:33