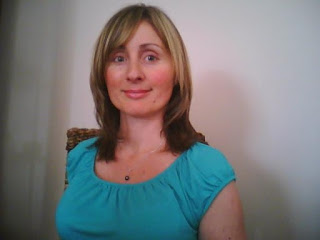 Welcome, Emma!  Please tell us a little about your new novel, Five Guns Blazing. (I’m particularly intrigued by the title!)

Five Guns Blazing tells the story of Laetitia Beedham, a pauper from the backstreets of London, who in 1710 is transported to Barbados along with her conniving mother, Molly. Laetitia is a vulnerable but surprisingly resilient character who survives two years in the workhouse, seventy gruelling days on the open sea and a punishing regime on a Caribbean sugar plantation. On her eighteenth birthday, Laetitia is sold to pirate captain John ‘Calico Jack’ Rackham but soon finds herself torn between her admiration for the captain and her feelings for his beautiful but double-crossing wife, Anne Bonny. As the King’s men close in on the pirates, Anne hatches a devious plan, set to speed Laetitia straight to the noose.

The title comes from Anne Bonny’s final piratical escapade, when the ship was stormed by Governor Lawes’ men whilst most of the men were drunk below deck. She fought valiantly, with a pistol in each hand, along with Mary Read and another unknown pirate, their five guns blazing. As the pirate hunters threw boarding hooks onto the deck of Anne’s sloop, she swore and cursed at the cowardice of her male shipmates, shouting, “Dogs, all of them! If only we’d had some more women with us instead of these damned weaklings!” 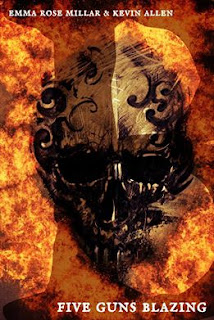 What inspired you to write this particular story?

I was at a barbeque and someone was playing an old Adam and the Ants song called Five Guns West, which contained the lyrics, Ladies can be captains and ladies can be chiefs, just like glorious Amazons, Anne Bonny, Mary Read. Up until then, I’d never heard of any female pirates; women supposedly weren’t allowed on pirate ships because they brought bad luck! How did an ordinary girl from London and an attorney’s daughter from County Cork come to be the most villainous women ever to take to the seas? The more I read about the pair, the more fascinated I became. Their sloop, Revenge was captained by the handsome, charismatic pirate, John Rackham, known more for his gentlemanly conduct and outlandish fashion sense than his treacherous exploits. He was a Romeo, the Lothario of the high seas.  It was the women who were the most vicious members of the crew, wielding pistols and machetes, lighting fuses, and ordering the men to kill their captives. Anne in particular was slippery as an eel and managed to escape execution on numerous occasions. It seemed there was a novel just begging to be written. 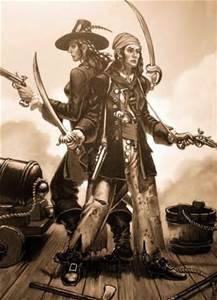 How did you first hear about Crooked Cat Publishing, and what made you decide to submit to them?

I discovered Crooked Cat just by doing a google search for independent publishers. They were closed for submissions at the time but I loved the idea of being a part of a supportive community of authors, and their eclectic mix of books, many of which seemed to fit into more than one genre, as does mine. I kept checking back on their website and as soon as they were open for submissions I sent my manuscript straight away. I was so happy when they accepted Five Guns Blazing. Everyone has been so welcoming; it feels like it was meant to be.

What can we expect from you next, writing-wise?

My first novel, Strains from an Aeolian Harp, is a dark tale of obsession and opium addiction set in 1920s Britain. I’m re-editing it at the moment and am hoping to find it a new home. I’m also working on a novel called The Women Friends, based on the painting of the same name by Gustav Klimt, which was burnt on the last day of World War II. I have also written a children’s picture book series called The Amazing Adventures of Nathan Molloy, which I have had a lot of interest in.

Please tell us a little about the real Emma Rose Millar:

What do you like to do when you aren’t writing?

I’m very busy, Sue. I’m a single mum with a five year old son, so I mostly do kids’ stuff when I’m not working, like swimming and fruit picking, and I’ve resurrected my old hobby from the 1970’s – roller skating! But if I do get time to myself then I love live comedy and live music, especially blues, reggae and ska.

What is your favourite food?

I’m really greedy and there’s nothing much I won’t eat, but I’d say my favourite food is Italian. I love the country, the language, the culture over there… and of course the wine!

Definitely Jamaica – well all of the Caribbean actually. It hasn’t always been a place I longed to visit, but once I started researching Five Guns Blazing, I became spellbound with all things piratical.  I’d love to go on a Caribbean cruise; it’s one of the many things I’ve got planned for my retirement.  I’d also like to go on a spa break in Iceland and visit the cities of Barcelona and Vienna. My latest novel’s set in Vienna and the Austrian countryside – I really should go there!

Just about everything! I’ve made so many mistakes over the years and no doubt I’ll keep making them! I suppose that what makes life so colourful and gives us authors plenty to write about. I wish I’d spent more time with my grandma - she died last year aged ninety after a short illness. In general I always wish I could be a nicer person. Having my son is the one thing I wouldn’t change though; becoming a mum is the best thing I ever did.

Thank you, Emma - it's been lovely talking to you.  Please come again!

Five Guns Blazing is available now on Amazon.
Posted by Broad Thoughts From A Home at 10:24