WHAT'S MINE, I KEEP - an interview with Alison Knight

Today sees the publication of Alison Knight's novel Mine.  I had the pleasure of working with Alison as editor of this story, and she joins me today to talk about this truly amazing tale. 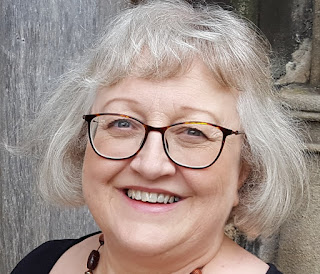 Mine is a very moving and powerful story, based on real events from the late 1960s.  What first prompted you to write it?

There are a number of reasons why I felt compelled to write Mine:

Firstly, I was a very young child at the time and my memories are those of a ten-year-old – filled with confusion and with no understanding of what had led my ordinary family into this extraordinary situation. I wanted to write about it to help me understand it from an adult’s perspective. In that context, it was excellent therapy and helped me to come to terms with things I’d previously never understood.

Another reason I wanted to write about it was that I wanted to show the people involved – people that I loved – as I remembered them. It’s too easy for people to look at the stark facts of an incident and assume that someone must be fundamentally bad. These weren’t bad people. They were like you or me – human, with faults. But they were basically good people, and I wanted to show that.

Finally, after my sister died a few years ago, I realised I was the only person left who could tell this story. I wanted to write it for my children and my nieces and nephew so that they would have a chance to get to know the people they never got a chance to meet.

How much of the story is based on your own memories?

The scenes featuring Caroline are my memories. Some of the dialogue, particularly between Jack and his brother Fred, is made up from snippets of conversations I overheard as a child (including the swearing). It’s amazing how adults sometimes forget that little ears are around!

The reason that Mine is offered as fiction is that there are so many gaps in the story, and the people who could fill those gaps are no longer around to tell us what happened. It’s therefore my imagining of what might have happened, based on memory, research and pure speculation.

What other sources did you use?

I put together pieces of the story from conversations with aunts and uncles, my sister and cousins. However, although they were all supportive of me writing this book, it was difficult to get some of the family to talk about it as they found it quite upsetting, even decades later, so I had to be sensitive to that.

I spent some time at the British Library’s Newspaper Archive, as there were several reports in national and local newspapers. As well as looking at specific articles about what happened, I was fascinated by what else was in those papers, from news reports to adverts and the personal columns. It all gave me a flavour of the time.

I was also given access to inquest files that are usually closed for seventy-five years. That was one of the hardest things to do, but it gave me information that I wouldn’t have been able to find anywhere else.

All this still left me with a lot of gaps in the story, so then I decided to look more closely at the culture of the time – attitudes to women, the class system, the fashions and music and things that were happening in those days. This gave me an insight into how people might have reacted to different situations and what society expected of them.

Did you find any aspects of the writing process difficult or upsetting?

Yes. This is the hardest thing I’ve ever written about. While some of it made me laugh out loud as I remembered happier moments, at other times I could barely see my computer screen through my tears.

On a lighter note, I found it very difficult to imagine and write about my parents having sex!

Now that the book is published and “out there”, how do you feel?

I have mixed feelings. I’m proud and pleased that my publisher loved the book so much. I’m excited because I think it’s the best thing I’ve ever written. But then I’m slightly terrified. I’m exposing my family to the world.

I remember having a discussion with my sister about our mother years ago. It quickly became clear that we each had very different view of her. It seemed as though we were talking about two completely different people rather than one woman.  I realised then that we each have our own truth about another person or a particular situation. Once I began my research, I realised that even witnesses who were standing next to each other gave differing accounts of the same scene. Each was sincere, and their statement was their own truth about the matter. As a result, Mine can only be described as my truth. My worry therefore, is that some of my relatives may have different memories of that time and may have a different truth about it. I’ve tried to make it clear to everyone that this is my imagining of what happened – a mix of memory, research and pure fiction – and that I haven’t set out to change anyone else’s truth.

Thank you for asking such interesting questions!

Thank you for giving such interesting answers!  I wish you every success with Mine.  It deserves to do well. 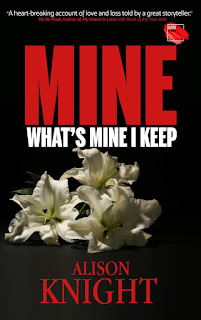 MINE by Alison Knight:

Lily's dreams of a better life for her family are shattered when her teenage daughter refuses to give up her illegitimate child.  It doesn't help that Lily's husband, Jack, takes their daughter's side.

Taking refuge in her work at a law firm in the City, Lily's growing feelings for her married boss soon provide a dangerous distraction.

Will Lily be able to resist temptation?  Or will the decisions made by these ordinary people lead them down an extraordinarly path that could destroy them all?

Mine - a powerful story of class, ambition and sexual politics.

Kit de Waal, award-winning author of My Name is Leon, said this about Mine:

"A heartbreaking account of love and loss told by a great storyteller.  Alison takes you into the heart of the tragedy with compassion, wit and even humour.  A beautiful story."

INVITATION TO AN ONLINE BOOK LAUNCH: On Saturday 28th November 2020, Alison will be joining four other authors for a joint event via Zoom called Darkstroke Defined.  The five writers will talk about their new books, read extracts and answer questions.  The event starts at 8pm UK time.  For your free ticket, go to: https://www.eventbrite.co.uk/e/darkstroke-defined-tickets-125793372363 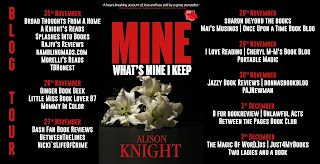