Today I'm delighted to welcome back my dear friend and fellow-author Alison Knight, whose latest novel The Hidden has just been released.  I had the honour of working with Alison as her editor (not that her work has ever needed much editing!), and I can thoroughly recommend this excellent story. 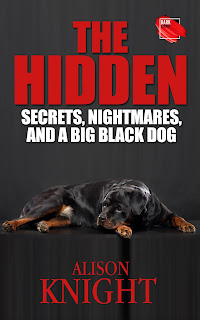 AN EXTRACT FROM THE HIDDEN

Background: New York, 1973. Faye has been in hiding in America since something terrible happened to her, her boyfriend James and her brother Percy in London in 1969. She is currently living in a cabin in Montana. She receives news that her father has died and her mother, Elizabeth, wants to see her. They meet in the restaurant of the Waldorf Hotel in New York.

“I must say, you’re looking well. Life in America must suit you.”

“Who says I live in America?” Faye smiled. “I might have popped over the border from Canada, or hitch-hiked up from Mexico.”

“And did you do either of those things?”

Faye leaned forward, her hands on the table. “Call me that just one more time, and I walk,” she hissed. “I am not Felicity. I never will be again. Accept it.”

Elizabeth leaned back, her lips thinned.

“You always were a dramatic child. I’m your mother, for goodness’ sake. Surely it’s not too much to ask to know your new name and where you live?”

“It was explained to you at the time. The less you know, the better. It wouldn’t be safe for either of us. I’m actually trying to protect you. Can’t you accept that?”

“But it’s all over and done with now, isn’t it? You’re halfway around the world. Can’t we just be mother and daughter for a little while?”

Faye sat back and took a sip of her drink. She was stunned. In all her twenty-eight years, this was the first time Elizabeth had ever said anything like that to her. Her memories were of being told: Don’t do that, or Be quiet, or What have you done now, you bloody child? “Why change the habit of a lifetime?” she asked, her tone bitter.

She expected her mother to snarl back at her, but Elizabeth closed her eyes as though in pain.

“I know I haven’t been the best mother,” she said after a few moments. She took a sip of her martini and put the glass back on the table before going on. “We’ve all made mistakes. I just don’t want it to be too late before we do something about it. With your father and Percy both gone now…”

This time it was Faye who closed her eyes. “So you’re not here to blame me for Daddy’s demise as well as Percy’s?” she asked.

“Oh, darling, of course not. I know we blamed you initially over Percy, but well, while you were in hospital for all those months, it became quite clear with all the terrible things they said in the papers that your brother was the one who led you into the situation, and not the other way around.”

Faye felt her mouth drop open in surprise. Had she spent years broken under the burden of her guilt, while her parents had actually forgiven her?

The waiter arrived with their meals. A steak for Faye and a salad for her mother. Elizabeth couldn’t help raising her eyebrows as her daughter sliced into the meat and ate it with gusto. Faye wasn’t about to tell her mother that she’d been travelling for three days, had hardly slept, and had survived on snacks from bus stations and airports along the way.

They ate in silence for a few minutes until Faye felt human again.

“Why didn’t you tell me?” she asked, her tone mild. “Why wait nearly four years before saying this?”

Her mother put down her fork and picked up her napkin, blotting at her lips in order to preserve her carefully-applied lipstick. “We didn’t get a chance, darling. You were whisked away and we weren’t allowed to see you. They said we had to keep up the pretence that you were dead in order to keep you alive. Then they moved you on and that was that.”

She made it sound so uncomplicated, but it had been far from simple. Faye realised her mother hadn’t known how long she been in hospital, or the full extent of both her physical and mental injuries. It had been decided that she needed a complete break from her past, including what was left of her family, if they were to convince her assassins that she really was dead. Even now, she couldn’t tell her mother the real reason why she was moved on after a couple of months in hospital recovering from her physical injuries. She probably thinks I was rushed out of the country just to spite her, when in fact I was in an asylum going through a nervous breakdown.

“You could have asked to send a message,” she said, stabbing at her steak. She carried on eating steadily, even though she’d lost her appetite.

Faye looked up. Her mother looked genuinely sad for a moment, but then, in true Broughton family tradition, she rallied, pasting a smile on her face. “But that’s in the past, all of it. I’m here now, darling, and I have a marvellous idea. I’m booked on a Caribbean cruise, starting on Sunday. I’ve got a suite which has two bedrooms. Why don’t you come with me? We could spend the next couple of days shopping, my treat. Wouldn’t it be lovely to relax and explore the islands together?”

She wanted to lie, but what was the point? “No. But I have animals and people depending on me. I need to get back.”

She shook her head. “I’m not going to tell you, so please stop asking.” She held up a hand when her mother would have argued with her. “I know you think I’m making excuses, but I’m not. The people Percy and I got involved with weren’t some tinpot gang of thugs. They were organized, brutal and evil. There were far more of them than went to prison, and they never ever forgot. If they had just a hint that I’m still alive, they’d hunt me down. If they thought you knew where I was, they’d make you talk – and it wouldn’t be pretty. God, when one of them paid James a visit, he nearly wet himself.”

“Of course he did. That boy was an arse,” snapped his mother. “He had no backbone.”

MORE ABOUT THE HIDDEN

Faye has found sanctuary in a simple cabin in the wilds of the Crazy Mountains in Montana with a dog called Bear. She’s a long way from her old life in England. But she knows that one day her peaceful life could be invaded by her enemies, and she keeps her guard up at all times.

Jeff returns home from Vietnam, a wounded, damaged hero, just weeks after his father’s sudden death. He finds hostile, secretive Faye living in his cabin and refusing to leave. The reading of his father’s will adds another layer of mystery to this woman’s presence.

The tension between them grows as Jeff tries to overcome his nightmares and expose Faye’s scars and secrets. The more he learns about her, the more enigmatic she seems.

When her enemies come calling, she needs Jeff to protect her. Can they learn to trust each other? And will Faye ever be safe?

BUY LINK FOR THE HIDDEN: https://mybook.to/thehidden 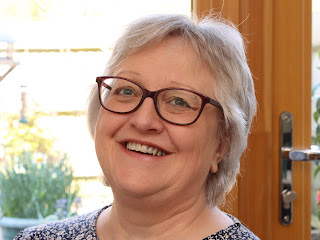 Alison Knight has been a legal executive, a registered childminder, a professional fund-raiser and a teacher. She has travelled the world – from spending a year as an exchange student in the US in the 1970s and trekking the Great Wall of China to celebrate her fortieth year and lots of other interesting places in between.

In her mid-forties, Alison went to university part-time and gained a first-class degree in Creative Writing at Bath Spa University and an MA in the same subject from Oxford Brookes University, both while still working full-time. Her first book was published a year after she completed her master’s degree.

Alison currently has a trio of novels published by Darkstroke. The first, Mine, is a domestic drama set in 1960s London based on real events in her family. She is the only person who can tell this particular story. Exploring themes of class, ambition and sexual politics, Mine shows how ordinary people can make choices that lead them into extraordinary situations.

The Legacy, a drama set in London in 1969, was inspired by a scene in Mine, and explores how an unexpected legacy can be both a blessing and a curse. The Legacy looks at themes of greed and expectations, and the lengths people will go to when they are desperate.

The Hidden, available from September 2021, is a romantic suspense that picks up the story of one of the characters in The Legacy. Set in Montana in 1973, two wounded, damaged people are forced together, each guarding their secrets. Can they learn to trust each other? And will their nightmares ever end?

Alison teaches creative and life-writing, runs workshops and retreats with Imagine Creative Writing Workshops (www.imaginecreativewriting.co.uk) as well as working as a freelance editor. She is a member of the Society of Authors and the Romantic Novelists’ Association.

She lives in Somerset, within sight of Glastonbury Tor. 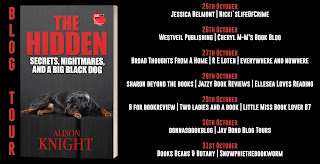 Posted by Broad Thoughts From A Home at 10:20