CROOKED CAT AUTHOR OF THE WEEK - DAY SIX: OVER TO THE DARK SIDE

After hearing his love say him "Nay",
he runs, broken-hearted, away.
Three years later, he's back,
having made quite a stack.
What went on in between?  Who can say?

Who indeed?  What did happen to Heathcliff during the three years when he disappeared from Wuthering Heights?

This is one of literature's most enduring mysteries, and back in 2018 I set myself the task of trying to solve it.

It proved to be quite a challenge, because the dates in Wuthering Heights are very precise.  Heathcliff disappeared in 1780 and returned in 1783.  My original idea was that he might have spent his missing years as a pirate, but I quickly discovered that the heyday of piracy was several decades too early.  I then wondered if he might have made his fortune in the American or Australian goldrush, but in both cases the goldrush years were not until the mid-1800s.  I eventually found an option which did fit with the correct dates, but if you want to find out what that was, you'll need to read Heathcliff: The Missing Years. (Psst - it's currently on special offer: the Kindle edition is just 99p for this week.) 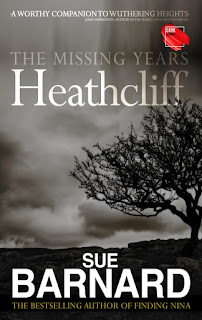 The novel was first published by Crooked Cat on 30 July 2018, to coincide with the bicentenary of the birth of Emily Brontë.  The original book has now had a makeover and a brand new cover, and has recently moved to Darkstroke - the imprint of Crooked Cat which deals specifically with crime, thriller and horror.

Darkstroke is currently open for submissions, and you can find the guidelines here.

Please join me again tomorrow for the final post in this series, when I'll be talking about what comes next.  In the meantime, remember that all my Kindle titles are just 99p each for this week only.  Click on the book covers on the right to find out more.
Posted by Broad Thoughts From A Home at 09:10