THE LEWIS CHESSMEN - a guest post by Yvonne Marjot 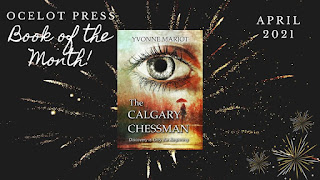 Today I'm delighted to welcome my friend and fellow-author Yvonne Marjot, whose amazing novel The Calgary Chessman is the Ocelot Press Book of the Month for April.  She's here to talk about the real-life discovery of The Lewis Chessmen, which provided the inspiration for the story. 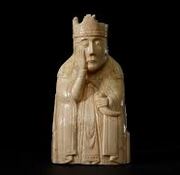 Central to the plot of The Calgary Chessman is the discovery of a mysterious object buried in the sand at Calgary Bay – an object that resembles one of the famous Lewis Chessmen. So, what do we know about the Lewis Chessmen?

Where and when were they found?

Factual information provided here came from several books, Archaeology magazines and websites including isleoflewischessset.co.uk. Although the Calgary chess piece is of course pure speculation, the Lewis chess pieces themselves are full of mystery, as almost nothing is known for sure about their origins, who they were made for, or how they came to be where they were found.

At some point before April 1831, at Uig* in the Isle of Lewis (Leòdhas), in the Outer Hebrides, a cache of just under 100 carved figures was found. The exact number and the circumstances of their finding remain clouded, though local legends name Malcolm MacLeod of Penny Donald (Peighinn Dòmhnall) in Uig as the finder. *Gaelic ‘Uig’ from Norse ‘Vik’ meaning a bay.

In 1831 Roderick Ririe from Stornoway (Steòrnabhagh on Lewis brought 93 ivory objects, most readily recognised as chess pieces, to a meeting of the Society of Antiquaries of Scotland, in Edinburgh. He sold some to a local dealer, but 10 had already been sold to Charles Sharpe. These (and one other) eventually ended up in the care of National Museums, Scotland. Later that year the British Museum purchased 83 pieces. The British Museum display is a highlight of any visit, and the pieces have real character and presence. I never visit the museum without paying them my respects.

It’s easy to imagine a lone man digging in dunes, perhaps where a storm has shifted the sand, and spotting something interesting. But Sharpe’s description (by this point at least third-hand) suggests the pieces were in some kind of stone-lined chamber or vaulted room, which became exposed by erosion. This was said to be associated with a nearby nunnery (although no evidence of the nunnery remains) but might instead have been a souterrain, an Iron Age underground storage structure, common in this part of Scotland.

There is speculation, with some justification, that the find spot was in fact not Penny Donald but an abandoned township called Mèalasta, near Uig Strand, where there was a medieval church and a quite substantial and wealthy township, the kind that might well have been able to afford expensive luxuries such as gaming tokens. It is also believed that rather than being a single chance find, some of the chessmen could have been discovered as early as the 1780s, and may have been displayed in a local house until an antiquarian (perhaps Ririe himself)  happened to see them and realise they must be ancient (and possibly valuable).

In The Calgary Chessman I’ve stuck with the idea of a chance find, dug out of beach sand. Calgary Bay, with its wild north-western outlook and scattering of homes, bears a strong resemblance to Uig strand today: white shell-sand dancing across empty beaches backed by machair and rising sand dunes. It’s easy to walk there today and imagine that treasure could be hidden beneath the sand, just waiting to be discovered.

How old are they, and where did they come from?

The age of the chessmen (calculated by a range of means, including details of their decoration) suggests they were made during the ascendancy of the Lords of the Isles. Their design harkens back to Viking times, but they are not believed to originate from that era, despite the some of the ‘warders’ (the equivalent of rooks in the modern game) being depicted as berserkers, biting their shields in rage. More is said about this in The Calgary Chessman, but amongst other evidence is the fact that these are amongst the earliest chess figures ever found that have the bishop pieces wearing their mitre (hat) sideways, as bishops do today. 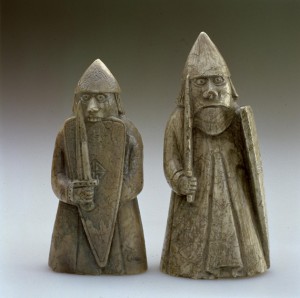 It’s generally agreed that they date from the period 1150-1200A.D. This includes the period where the Archbishop of Nidaros (Trondheim) in Norway. was given authority over all the bishops of the Isles. This might prove important, as there is strong evidence the chess pieces originated in Scandinavia, perhaps even at Trondheim itself.

Two chess pieces similar to the Lewis hoard were found in digs at Trondheim, and that seems too big a coincidence to ignore. On the other hand, it looks likely that the walrus ivory from which most of the pieces were made came through the Icelandic trade, and an argument can be made for a craft workshop based in Iceland itself. These days, Scandinavia seems very remote from Scotland, but during the early Middle Ages there was a strong trade presence right down the west coast of Scotland and through the Isles, and also between Norway, Iceland, Shetland and the Orkneys. There’s every reason to expect Norse traders to be working in the Inner and Outer Hebrides at the time.

I hope you’ve enjoyed this taste of the tale of the Lewis Chessmen (utterly real and solid and sitting in museums waiting to greet you when we are once again allowed to visit), and that it whets your appetite to read more about my imaginary chess piece, and the role it comes to play in the life of my protagonist, Cas Longmore, in The Calgary Chessman. 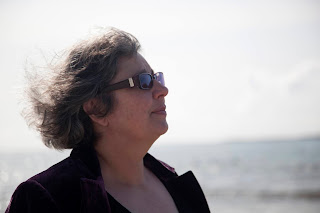 Yvonne Marjot is a lost kiwi, now living in the Inner Hebrides. She has been making up stories and poems for as long as she can remember, and once won a case of port in a poetry competition. Her archaeological romances, beginning with The Calgary Chessman, are published with Ocelot Press, along with her paranormal romance, Walking on Wild Air.

She lives on the Isle of Mull where she is volunteering during the Covid19 pandemic, but normally runs the local public library. She has three grown-up children and a very naughty cat.