BREAKING NEWS: The Unkindest Cut of All is now available for pre-order for just 99p!

My latest offering to the world of literature, The Unkindest Cut of All, will be officially released on Tuesday 9th June. 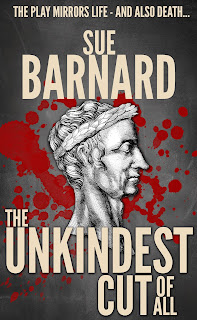 Brian Wilmer is God's gift to amateur dramatics - and he knows it.  So when the Castlemarsh Players take the ambitious decision to stage Shakespeare's Julius Caesar, there is only one man who can play the title role - even though Brian's posturing 'prima donna' attitude has, over the years, won him few friends and many foes.

Rehearsals progress apace, and the production draws ever closer.  But when another member of the cast has to drop out due to illness, local journalist Sarah Carmichael (a stalwart of the Players' backstage crew) suddenly finds herself called upon to step into the breach at the eleventh hour.

Not surprisingly, Sarah finds that Brian is in his egotistical element playing the mighty Caesar.  The fact that the final performance of the play takes place on the infamous Ides of March - the day when, according to tradition, Caesar was fatally stabbed - only adds to the excitement.

But tragedy is waiting in the wings.  And when it strikes, it falls to Sarah - with the help of Brian's personable and fascinating nephew Martin Burns - to uncover the incredible truth about what really happened...

There will be an online launch event on Facebook on the day, with fun, frolics, competitions and prizes.  To join the party, click here.  But in the meantime, you can now pre-order the e-book on Amazon (just click here and you will be taken to the right place) for the extra-special "early bird" price of only 99p!  Order it now, and it will magically appear on your Kindle on launch day.
Posted by Broad Thoughts From A Home at 11:51