THE TAEXALI Game - a guest post by Nancy Jardine

Today I have the pleasure of welcoming back friend and fellow-author Nancy Jardine, whose new YA novel The Taexali Game is due out this coming Friday. 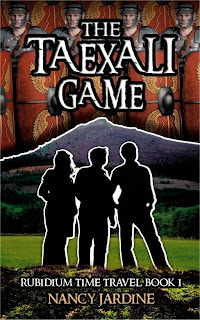 Thank you, Sue, for opening your blog to me to share the information about my latest novel!

The Taexali Game officially launches on the 22nd May 2015.

The action of The Taexali Game —Book 1 of Nancy Jardine’s  Rubidium Time Travel Series of Adventures for Middle Grade/YA readers (and anyone older who loves a good fast-paced yarn)— takes place in ‘Aberdeenshire, Scotland’ in AD 210, during the invasion of the legions of Septimius Severus, Emperor of Rome. The local Taexali Celtic tribes of this far north in Britannia have already had dealings with the soldiers of , back in AD 84, but they haven’t been good subjects. They’ve been causing such a lot of grief to the Governor of Britannia that the Ancient Roman Emperor, Septimius Severus, has come to Britannia to flood the north with his super-trained army to teach the wayward Celts a harsh lesson.

During their adventure, Aran and the twins— Brian and Fianna— are initially in awe of the Roman fighting machine but they find Emperor Severus’ is a horrible man. That’s only till they meet the emperor’s son Caracalla who is even nastier. None of them want to be skewered by a Roman gladius or slapped into Roman slave chains but avoiding that fate is nearly impossible.

As well as uncovering the answer to a local contemporary mystery, the time travellers have a task list to fulfil but how can they when the some of the Celts they encounter are just as deadly wielding their Celtic longswords?

This adventure novel is designed as a rollicking good read with the added bonus of being a companion novel to younger readers doing a study of Celtic Roman Britain. There’s a wealth of historical data used in the novel, gleaned from archaeological interpretative information, wrapped up in a fast-paced, readable, adventure mystery quest.

The fantastic cover design is by graphic artist Neil Saddler, who has done a great job to encompass the main aspects of the novel - its impact both local and global.

Callum Fraser’s games are totally awesome.  But when his Rubidium Time-Leap flips Aran Bruce and his best friends—Brian and Fianna Fraser—back to AD 210, the reality is incredible. They have a task list to fulfil, which includes solving a local mystery, but it’s a nightmarish business when Ancient Roman Emperor Severus and his legions heap death and destruction on the Taexali Celts of northern Britannia.

Giving help to Celts and Romans alike becomes a lethal assignment—some Celtic chiefs are as foul as Severus and his beastly son Caracalla. Dicing with death becomes the norm for the time-travellers from Kintore, Aberdeenshire.

Will they complete the mission and return to Callum unscathed?

All are welcome to pop into the official Facebook Event that’s on-line to launch the novel on Friday 22nd May. Participate in fun quizzes featuring Celts and Romans and win a novelty prize. The grand prize of a signed paperback of The Taexali Game could be yours, or if you only read on kindle a few review e-copies will also be on offer as prizes.

More about Nancy Jardine
Her Celtic Fervour Series of Historical Romantic Adventures (3 books to date) is set in first century AD northern Roman Britain. Book 3 (AD 84) culminates in a horrendous clashing of Celtic Sword and Roman Gladius on the foothills of Beinn Na Ciche (Bennachie) where the amassed Celtic warriors of the north, led by tribal leader Calgach, take on the mighty Roman legions led by General Gnaeus Julius Agricola. Book 2 of the Celtic Fervour Series was in the long list of books read for THE WALTER SCOTT PRIZE FOR HISTORICAL FICTION 2014.

Nancy Jardine also writes contemporary mystery romantic fiction which gives her the opportunity to include fabulous world wide locations in her novels—, , , to name only a few. She has also had great fun using her love of ancestry research when creating the family trees for two of her contemporary mysteries. Take Me Now, a humorous mystery/thriller will be re-launched by Crooked Cat Publishing on the 5th June 2015. Topaz Eyes, a mystery /thriller was a Finalist in THE PEOPLE’S BOOK PRIZE 2014.

Please contact her/ or find updates on her writing at these author links:

Posted by Broad Thoughts From A Home at 17:05