PICA-BOO - an interview with Jeff Gardiner

Today I have the great pleasure of welcoming back my multi-talented friend and fellow-author Jeff Gardiner, who is here to talk about life, the universe, and his new novel Pica. 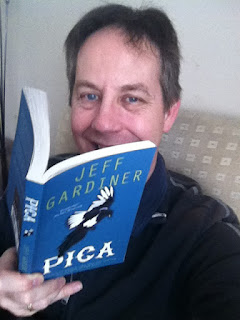 Welcome, Jeff!  What prompted you to first start writing? What was the first thing you wrote?

I’ve always loved expressing ideas in words, and I still have a head full of images, stories and ideas. Writing was (is) something I have to do – I think I’d go mad if I didn’t. I wrote very bad poetry as a teenager/student: overwrought and introspective stuff that must remain private (or would make good fuel for a warming fire).

I completed an MPhil thesis, which I developed into my non-fiction book The Law of Chaos: the Multiverse of Michael Moorcock (originally The Age of Chaos before being expanded and revised). Then I began to write short stories which eventually got accepted by various magazines, anthologies and websites.

Pica (the first in my Gaia trilogy) is set in the modern world, exploring our relationship with nature. Luke is a bored and cynical teenager who – through the mysterious Guy – is unwillingly introduced to the wonders and ancient magic of our natural world.  His life is irrevocably changed.

When I was a secondary school teacher I was shocked by how indifferent some teenagers were by nature and our miraculous world. There were pupils who never went for walks in the countryside; who never felt that inspiration of being surrounded by hills, rivers, wildlife and forests. It seemed to mean nothing to them. I felt they were missing out on something incredible. Pica is my response to that indifference. As well as introducing environmental issues, I want the reader to find the sense of wonder I feel when I’m out in the countryside.

I don’t have the luxury of being a full-time writer, so I mix it up with editing, supply teaching and extras work for film and TV. On a writing day I’ll get the kids to school and then be back around 9am, knowing I have until about 2.45pm to myself. Of course there are also usually a few chores to get done – not least clean out the guinea pig hutch. Once done I can settle down to work. Writing involves reading through what I did last time and then checking my notes and giving myself a realistic aim for the day: say, 1000 words. If I achieve my aim then that’s a great day, but I won’t beat myself up if I don’t get there. Once the kids are home I give them my attention, and sometimes I might also do another hour or so more writing in the evening, depending on how I feel… unless there’s football or some good comedy on, or a film… or…

I plan them – but with lots of holes and breathing space. I know that as I write, things will change, so there has to be some flexibility. I find my best ideas come in the middle of writing the novel.

Writing is a wonderful creative act, so I know I’m lucky to have the chance to write. Having work accepted and finally published is fantastic. The rejections and hard slog are the tough side. Writing isn’t as glamorous as some might imagine. It’s actually a bit lonely and can lead to cabin fever. It’s important to get out and meet people before you enter that spiral of insanity. ‘The Shining’ isn’t just a horror novel and movie. It’s a piece of non-fiction and a documentary accurately depicting the effects of being a writer.

Pica (and the rest of the trilogy) contains an environmental message. We are destroying our world because we are greedy and selfish. Something needs to change: mostly our attitudes – especially in the West. We need to understand our place within nature, rather than continue to fool ourselves into thinking we are the planet’s masters.

Never give up. Have faith in yourself and your writing. Be VERY patient and set long term goals. But don’t give up. (Did I mention that?)

Thanks, Sue, for hosting me on your blog. 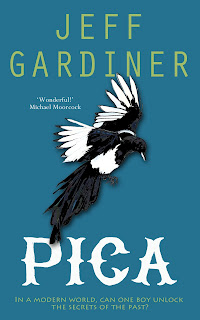 Pica explores a world of ancient magic, when people and nature shared secret powers.
Luke hates nature, preferring the excitement of computer games to dull walks in the countryside, but his view of the world around him drastically begins to change when enigmatic loner, Guy, for whom Luke is reluctantly made to feel responsible, shows him some of the secrets that the very planet itself appears to be hiding from modern society.

Set in a very recognisable world of school and the realities of family-life, Luke tumbles into a fascinating world of magic and fantasy where transformations and shifting identities become an escape from the world. Luke gets caught up in an inescapable path that affects his very existence, as the view of the world around him drastically begins to change.

Jeff Gardiner is the author of four novels (Pica, Igboland, Myopia and Treading On Dreams), a collection of short stories, and a work of non-fiction. Many of his short stories have appeared in anthologies, magazines and websites.

Pica is the first in the Gaia trilogy – a fantasy of transformation and ancient magic, which Michael Moorcock described as “An engrossing and original story, beautifully told. Wonderful!”

For more information, please see his website at www.jeffgardiner.com and his blog: http://jeffgardiner.wordpress.com/

Posted by Broad Thoughts From A Home at 13:28