Tomorrow (May 10th) is publication day for The Suspects by Katharine Johnson.  She's here to talk about why she wrote the book. 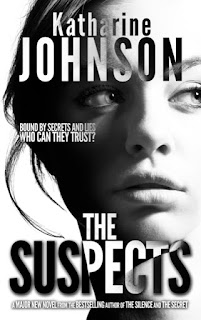 Thanks Sue.  Here's the blurb:

Bristol, 1988. Five young graduates on the threshold of their careers buy a house together in order to get a foot on the property ladder before prices rocket out of their reach. But it soon becomes the house-share from hell.

After their New Year’s Eve party, they discover a body – and it's clear they’ll be the first suspects. As each of them has a good reason from their past not to trust the police, they come up with a solution – one which forces them into a life of secrets and lies. But can they trust each other?

Why I chose to write about the house-share from hell

Like my other books, The Suspects is about a life-changing decision. My characters aren’t evil, but are responsible for what happens because they make decisions which determine their fate. As Emily says: “We aren’t bad people, we just made a bad choice.”

Although The Suspects is about a crime and is quite angst-ridden, it’s not a blood-and-guts thriller or police procedural and is far more about the psychology of the characters.

I chose a shared house for the setting because I wanted the story to take place in a small, claustrophobic environment with a limited number of characters, to maximise the tensions between them.

Buying a house with four strangers obviously isn’t ideal, but Emily, Stuart, Xanthe, Zak and Imogen are all new to the town and have just started work in the same company on a journalism training scheme and have been unhappy with their current accommodation. They’ve shared houses before as students and they don’t want to miss out on the opportunity to buy somewhere before it’s too late.

The shared house is in Clifton, a very desirable part of town, and they’d never be able to afford a house like this on their own. The plan is to own it for a short time and then sell and go their separate ways.

To begin with they’re on their best behaviour, but the cracks in their relationship soon start to show. But as co-owners rather than tenants of the property, the five are trapped by the house and are jointly responsible for the increasing mortgage payments, which piles on the pressure. Because of the economic climate they have no chance of selling up.

And then of course they find the body…

It’s the 1980s, so they spend a lot of their time playing Scruples, but they’re now forced into making a huge moral decision. They don’t choose to find a body after their party but they do make a series of decisions as a result.

Just at the point where they find how incompatible they are they’re suddenly forced together, and depend on each other to stay ahead of the police, but at the same time they’re starting to question whether one of them knows how the body got there and whether they’re safe in the house. One lie leads to another, secrets are uncovered, and the climate of mutual suspicion escalates.

Will they stick together as agreed or save themselves?

There will be extracts, info and fun facts at The Suspects Online Launch Party on Facebook tomorrow – just click this link and select Going.
https://www.facebook.com/events/998754480515495/

You can read the opening using the Look Inside feature or buy the book here https://mybook.to/thesuspects 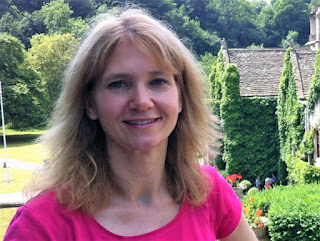 Katharine Johnson writes psychological and historical suspense set in England and Italy. She grew up in Bristol and now lives in Berkshire. She’s worked as a journalist on lots of magazines and has written a history book which will be published later this year. When not writing you’ll find her with a book in one hand and a coffee in the other, restoring a house in Italy, walking her spaniel, or playing netball (although not usually at the same time.)

Posted by Broad Thoughts From A Home at 10:00