AIMS AND REALITIES - a guest post by Nancy Jardine


Today I have the pleasure of welcoming back my fellow Crooked Cat author Nancy Jardine, whose latest book in the Celtic Fervour series is about to hit the shelves.

Hi Sue! Thank you so much for inviting me here, so close to the launch of Book 3 of my Celtic Fervour Series- After Whorl: Donning Double Cloaks from Crooked Cat Publishing - which releases on 25th March 2014. I thought you might appreciate reading about what I’ve been attempting in these novels which, I think, make them slightly different and hard to categorise genre-wise. I’ve recently read, and loved, The Ghostly Father, so I know exactly how you’ve attempted to ensure that any historical facts that you’ve used have been relevant and in keeping with the era you were writing about. I too have an insatiable need to create believable authentic fiction.

In general, if you pick up a novel that’s termed Historical Fiction it’s crammed full of historical, factual information. The plots are often centred on the machinations of aristocratic nobility, or are dominated by war or politics. Often these books are on the lengthy side. I, personally, usually love these novels since they satisfy my ravenous need to learn about historical periods, although overly heavy descriptive passages can be tedious to wade through. Any romantic elements in historical fiction tend to be a minor aspect of the plot. A Happy-Ever-After (HEA) ending is not required, and the happy couple wandering off into the sunset hand in hand does not generally feature in Historical Fiction.

Historical Romance novels, especially those from ‘romance only’ publishers, can veer very much in the opposite direction. The romance is completely central to the plot and the historical aspects often form a very scant and (it has to be said) sometimes anachronistic and inaccurate backdrop. There must be an HEA ending for them to qualify as Historical Romance and be accepted by some of the romance publishers, therefore the budding relationship has to dominate the story: angst, rejection and doubt are often used to enhance the development of the characters. I can enjoy the romantic storyline, but if history is part of the title, brief detail of the historical background just doesn’t suffice for me. I personally need more to really live in a past era along with the characters.

Can there then be a compromise? I’m not sure, but what I’m aiming for in my Celtic Fervour Series, set in AD 71-84, is a really authentic backdrop of solid historical facts (at least as much as is possible given my chosen era is so long ago and there is a serious dearth of written facts available to the researcher). However, I’m also aiming for variable degrees of romance across the series; a dash of adventure; some intrigue; some bloody war and some mystery. Are my stories then a mish-mash? Some purists might deem them so. Since it’s hard to please all readers and reviewers, I’m writing in the way my heart dictates, and I’m glad to say my publisher - Crooked Cat Publishing- is happy for me to categorise it as Historical Romantic Adventure. 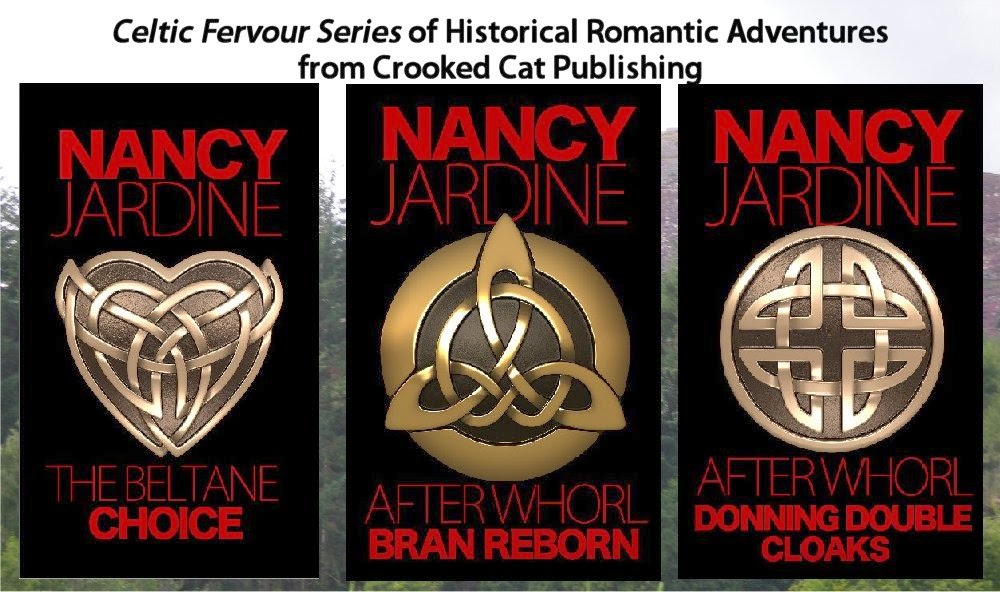 Book 1, The Beltane Choice, has a strong romantic theme running through it, the developing relationship of Lorcan of the Brigantes and Nara of the Selgovae a crucial part of the whole plot and yet their tale is set in as authentic a setting as possible. Book 1 is mainly written from the Celtic perspective; any Roman references being what I’d term remote. The Roman expansion into northern Britain in AD 71 affects and dictates the actions of my Celtic characters, but there are no specific Roman characters appearing in the first novel. I’m delighted that many of the reviews for The Beltane Choice reflect my efforts over Celtic ‘authenticity’ and show appreciation of my ‘believable’ Garrigill characters.

Book 2, After Whorl: Bran Reborn, has a romantic attachment but the plot is not driven by it. The love Brennus has for Ineda is not necessarily fulfilled; there’s not an HEA ending to the book, but there’s an expectation for better situations for my two main characters- Brennus of Garrigill and Ineda of Marske. Though it’s not a war novel there are battle references and scenes of war; there is a lot more detail of the insidious Roman fort building in Brigantia (my version envisaged from thorough research); and the life of the spy against Rome is central to the plot. Is it a spy thriller? No, it’s not - though it could be said to have elements of intrigue and aspects of the thriller as well. What about adventure? I definitely like this aspect being attached to its description since it’s meant to be an adventure in first century Britain, though not ‘hanging off a cliff’ on every page. Is this second novel of the series also heavily biased towards the Celtic viewpoint? No. There are many Roman characters appearing in Book 2. I’d say the bias is around 50/50 Roman and Celt. I’m delighted to say a reviewer got my aims ‘spot on’ in her 5* Amazon review and mentioned the slide away from the more traditional romance of the first book to a more solidly historical one in Book 2.

Book 3, After Whorl: Donning Double Cloaks continues the separate journeys through life, literally and figuratively, of Brennus and Ineda. Fate often gets in the way of developing relationships, and in my Celtic Fervour Series it’s the armies of Rome, and specifically Tribune Gaius Livanus Valerius, who separate Ineda and Brennus (also known as Bran). As with Book 2, there are romantic attachments in the third book but those do not necessarily lead to an HEA ending for all of my main characters - though romance readers will be heartened by the fact that finding true love is not ruled out. There are many more minor Roman characters in this novel and yet, I believe, the bias of Roman/Celt perspectives is still around the 50/50 mark.

There are more tactical war aspects in Book 3, a very large battle between amassed Celtic tribes and the legions of Rome featuring towards the end of the story. In addition, in many ways the tale is about relentless inevitability as my characters Celts and Romans push northwards, all the way to my own part of north-east Scotland. My Celtic characters seem always just one step ahead of the Roman Army as it tramps its way to the final battle scene at the hill range named Beinn Na Ciche.

That may make it sound as though Book 3 is all about battle-hardened soldiers? Not at all!  It’s about my Garrigill warriors and their families!

Thank you for allowing me to share my writing choices with you and your readers, Sue.

Nancy Jardine lives in Aberdeenshire, Scotland, in an area that’s steeped in ancient standing stones, tombs, ruined castles and fantastic Scots Baronial architecture. A lover of all things Scottish, her homeland creeps into her writing as does her fascination with history- Celtic/ Roman Britain in particular- though keeping herself updated is a constant battle, since history is being rewritten almost every week as new archaeological discoveries are made. Writing time is shared with regular grandchild minding duties, tending her large garden, ancestry research and leisure reading. She is currently writing a family saga based mainly in Scotland, and Book 4 of her Celtic Fervour series.