YOUR ATTENTION PLEASE! - a guest post by Ailsa Abraham

Once again, I'm joined by my soul sister and fellow-scribe, the fabulous Ailsa Abraham, whose latest novel Attention to Death is released a week from now. 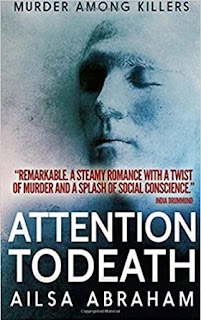 Thank you, Sue, for inviting me to talk about my latest release.  This is a departure from my previous series in magical realism. Here I take off on murder mystery.

Attention to Death is released on 10th March.  It's available for pre-order now: http://mybook.to/AttentionDeath

"In Attention to Death, Ailsa Abraham pulls off something I wouldn't have thought possible - a steamy romance with a twist of murder and a splash of social conscience. A remarkable book that will have you turning pages as quickly as you can to find out what happens next."
(India Drummond, author of the Caledonia Fae series)

Finding a murderer among a group of killers is not going to be easy for two Royal Army Military Police investigators, Captain Angus Simpson and Staff-Sergeant Rafael ‘Raff’ Landen, whose Christmas leave is cancelled for an investigation into a suspicious death on a base in Germany.
The case is further complicated by unhelpful senior officers who make pre-judgements on colour, creed, race and sexuality. Yet the insight of the investigators helps them uncover a sinister plot, although they too have something to hide: their own fledgling relationship.
Will Angus and Raff be able to solve the murder without giving away their secret?
The best and worst of human nature is represented in this story, which is why it is suggested for over 18s only.

To research this book, I delved into my past life as an officer in the Royal Air Force and my lifelong friendships with gay men.  Coming right after LGBT History Month in February, it highlights the problems faced by men who have to be “in the closet”, and the sort of bigotry that causes people to refuse to read a book just because there are gay characters in it (although this doesn't stop them leaving reviews). Me? I've never been too sure. I'm gender-neutral. which is why the first thing I wonder on meeting new people is not “What do they do in  their bedrooms?”

Read it for yourself and decide. Is it an honest portrayal of two men doing their job who just happen to have started an affair?

Ailsa Abraham  is the author of six novels. Alchemy is the prequel to Shaman's Drum, published by Crooked Cat in January 2014. Both are best-sellers in their genres on Amazon. She also writes mystery romance.

She has lived in France since 1990 and is now a naturalised Frenchwoman. She enjoys knitting and crochet, and until recently was the oldest Hell's Angel in town . Her interests include campaigning for animal rights, experimenting with different genres of writing and trips back to the UK to visit friends and family.  She is also addicted to dressing up, saying that she is old enough to know better but too wise to care (pirate gear is her favourite!)


Linked-In
Posted by Broad Thoughts From A Home at 10:38 4 comments: