WORTHY OF ATTENTION - an interview with Ailsa Abraham

Today I have the pleasure of welcoming back my dear friend and fellow-author Ailsa Abraham, whose latest novel Attention to Death - her first venture into crime fiction - is due out next month. 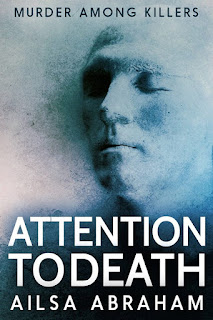 Welcome, Ailsa.  This is your third novel for Crooked Cat, but you’ve completely changed genres this time around. Why?

This may sound weird (I often do) but as I live my life as the Village Healer and shaman, I wanted a change of scene. Writing my Alchemy series was too close to my real life. I don't watch much TV but when I do gore and guesswork is my favourite.

Was it difficult to switch genres like this? Did you get any help with the research for this one, or did you do it all yourself?

Not really, because I cheated and delved back into my past, when I was in the Royal Air Force. My partner served in the Royal Navy for over twenty years. We still tend to use “mob-speak” to each other, and that includes a great deal of swearing. I did, however, have to do a lot of research as I based my novel in the Army (Military Police). I think this was done to stop either of us claiming that it was MY book. I had to Google a lot of geography and asked for advice from friends still in the military.

How is this different from what you’ve done in the past?

All my life, I've been writing in all sorts of genres. Yes, in my published work I am known for short stories and magical realism but I've tried my hand at everything apart from chick-lit, mainly because I don't consider myself a “chick”.  Much of my “other” work is only known to my friends because they were my audience in the past. I've even been known to dabble in poetry but I wouldn't dream of publishing it apart from as humour on Facebook.

Without giving away any spoilers, I know that Attention to Death deals with some pretty controversial themes.  What made you want to write about them, and how challenging did you find it?

It's fair to say that it is not a book for the faint-hearted. There are some gory scenes and some very un-PC language, as would be normal on a military base. The real message behind the murder mystery is about judgemental people. The case is very nearly ruined by those who are prejudiced about race, colour, creed or sexuality, who make sweeping assumptions and won't consider other solutions. Homosexuality is featured very strongly, because I have had gay friends all my life and they still suffer from outdated and untrue stereotyping.

Is there a message in Attention to Death?

Yes, there is; it’s forgiveness and tolerance – even though these are sometimes the hardest virtues to practice.

I’ve already had a sneak peek at this book, and it’s a corker.  What did you enjoy most about writing it?

As someone who is non-gender specific I found writing as a man rather good. I enjoyed going back to my own military days when I was accepted as “just another bloke”, being able to write in that style made a change.

Where can readers find out more?

The book is released on 10 March 2017, but is now available for pre-order.  Click here to be taken directly to your local Amazon site.  Meanwhile, here’s a hint of what’s in store:

Finding a murderer among a group of killers is not going to be easy for two Royal Army Military Police investigators, Captain Angus Simpson and Staff-Sergeant Rafael 'Raff' Landen, whose Christmas leave is cancelled for an investigation into a suspicious death on a base in Germany.

The case is further complicated by unhelpful senior officers who make pre-judgements on colour, creed, race and sexuality.  Yet the insight of the investigators helps them uncover a sinister plot, although they too have something to hide: their own fledgling relationship.

Will Angus and Raff be able to solve the murder without giving away their secret?

The best and worst of human nature is represented in this story, which is why it is suggested for over-18s only.

Ailsa Abraham retired early from a string of jobs, including serving in the Royal Air Force, and Veterinary Nursing, ending with teaching English to adults. She has lived in France since 1990 and is now a French citizen. Her passions are animal welfare and motorbikes which have taken the place of horses in her life now that ill-health prevents her riding.

She copes with illness with her usual wry humour: “Well if I didn't have all those, I'd have to work for a living, instead of being an author, which is much more fun.” Her ambition in life is to keep breathing and writing. She currently works in pagan magical realism and detective fiction, although would like to explore other genres too.

Posted by Broad Thoughts From A Home at 10:33 4 comments: