A MAN IN PIECES - an interview with Henry Corrigan

Today I'm delighted to welcome my fellow-author Henry Corrigan, whose novel A Man in Pieces is published today by Darkstroke Books. 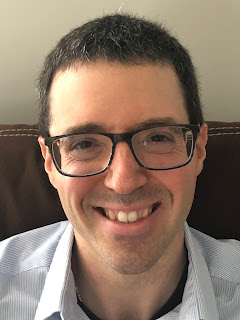 What was the first thing you wrote?

The first thing I can remember writing is a Voltron comic book. I was, and still am, a huge Voltron fan and while I can’t remember how old I was, I can remember that trying to draw and write at the same time was really hard, especially when it came to squeezing what I’m sure was pithy dialogue into all those word bubbles. 😊

Can you summarize your latest work in just a few words?

Just a few words? Oh, good God, no. How about a blurb? Does a blurb work? A blurb will work. 😊

Driven by bad choices and worse options, a desperate father-to-be must battle his abusive boss for the last slot at a dead-end job, but the fight may lead one of them to murder.

My nightmares. I was having nightmares every other day about what some would consider to be very mundane things. Paying the bills, letting people down, dealing with a hellish job and worse co-workers, dreading something bad happening to the people I loved. I started writing the book as a way to get the nightmares out, and it wasn’t until I finished that I realised I had a story that would resonate with a lot of people. Just because something is mundane doesn’t mean it’s not malevolent. That’s the very definition of the banality of evil.

Most of my research was confined to one character, my deeply-closeted, self-hating antagonist Tom. He’s a veteran, and while I grew up around veterans (my father, grandfather and step-father), and even worked with veterans for ten years, I had no actual experience of the military. (I’m a hundred-and-sixty-pound nerd with terrible eyesight. It would’ve been a poor military that accepted me.) So I did some research in regard to military bases and certain time periods so as to make things as accurate as possible. Any inconsistencies readers may find are the fault of the research, not the author. 😊

Late nights and early mornings. I have a hellish day job and a lovely wife and daughter I’d actually like to see, so in those moments when I’m not too tired, I write in little speed bursts. 15-20 minute stretches where I get something down, no matter how choppy it might be.

I had the names of a number of my characters in mind from the very beginning, especially Claire, Mike and Tom. I’d wanted names that were short, sharp, and powerful: names that might be banal on the surface but would hit over time.

I tell everybody that I always know how a story begins and how it ends and it’s always when I get to the middle that things go wrong. Uncovering the details of the story always ends up determining where the story will go. So it’s kind of like what they say in the military: A plan always holds up until it encounters the enemy.

Stephen King most definitely, though RL Stine started me off; I’ve got dozens of Goosebumps books at home. Anne Rice taught me how to draw people into a world. Kurt Vonnegut taught me to make people laugh, even if you’ve got to make them cry first.

The best part of the process is a toss-up between the actual writing, having a story come together in ways that surprise you, and getting to know readers and other authors. Having others tell you they love what you create is such an awesome feeling, I can’t properly express it in words.

The worst part of the process is definitely the silence. It took a couple of years to write the book and then another seven years pitching it, and the worst part wasn’t being told No, but hearing nothing at all. After a while, I began to feel like the proverbial tree that fell in the forest. Regardless of whether I made a sound or not, nobody cared.

Better. Still anxious, I mean, I want to make a career out of this after all, but better. Knowing the book is out there, seeing the presale figures, knowing that someone has an interest in it is a huge deal for me, and I will probably cry the day I hold my book in my hands.

My book is bleak. Full stop. I’m not going to sugarcoat this, because bleak was what I was going for. My fears of What if the worst should happen? were what was keeping me up at night, so I wanted to showcase the worst. To give it life and let it breathe. But despite how dark things get, I want the reader to know that it is possible to turn away from our own worst selves. In fact, being able to do that is often the only thing that saves us.

Get used to silence, but keep pushing. By and large, the writing community is a wonderful place, full of people looking to support you and connect with your work. They will praise you, push you and challenge you, and while that might not always be comfortable, it can still help you get to where you need to go.

A lot, God willing. 😊 I’m actually at work on the first book in a new sci-fi series, I’ve got a new horror novella I’m editing and a couple of children’s books I’m hoping to shop around in the near future.

Good luck with those, Henry, and thank you for being my guest today!

Henry Corrigan is a bisexual, omnivore author, poet and playwright who writes every kind of story. Whether it’s horror or science fiction, erotica or poetry, high fantasy or children’s books, he writes it all because every story matters to him. They’re what keeps him going. Always an avid reader, Henry started writing poetry in middle school but it wasn’t until he started writing erotica in high school that he really learned the mechanics of writing. What started out as private stories and love letters, soon became publications in anthologies.
To date, he has the rough drafts of two science fiction books, one horror novella, one play, four children’s books, numerous poems and several song lyrics waiting in the wings. Above all, he wants to be known for not staying where he’s been put. To always surprise people, especially himself. Because that’s what makes it fun. The feeling that even he doesn’t know what he’s going to do next. 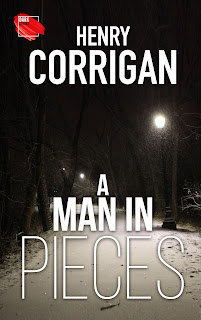 MORE ABOUT THE BOOK:
Driven by bad choices and worse options, a desperate father-to-be must battle his abusive boss for the last slot at a dead-end job, but the fight may lead one of them to murder.
Mike Harper would like nothing more than to burn his dead-end job to the ground. But with a wife on bed-rest and a son on the way, discovering that the company is downsizing couldn’t come at a worse time.  Now, struggling to stay afloat, Mike is forced to fight for the last remaining spot to secure his family’s future. It’s too bad that Tom, his obnoxious boss, is in the same boat.
Tom Downes is a man with few friends and even fewer prospects, but the aging veteran has never gone down without a fight. Now, with his health failing and his marriage falling apart, Tom is willing to do whatever it takes to keep his job.
With a blinding snowstorm closing in, these two desperate men will battle each other on a long and twisted road fraught with heartbreaking losses – and murder.
For when it comes to staying afloat, the American Dream can break anyone…
Sales Link:
https://www.amazon.com/dp/B0B1VXBZT3
Social Media Links:
Follow me on Twitter: https://twitter.com/HenryCorrigan
Amazon:https://www.amazon.com/HenryCorrigan/e/B09QLF8CCJ
Check out my latest articles on Medium: https://medium.com/@HenryCorrigan
Friend me on Facebook: https://www.facebook.com/henry.corrigan.35
Subscribe to my website: https://henry-corrigan-y0m6k8.mailerpage.com/
Blog: henrycorrigan.blogspot.com
Posted by Broad Thoughts From A Home at 10:24 No comments: