VOTE IN HASTE, REPENT AT LEISURE 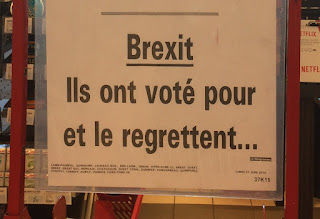 As those of you who know me at all well will no doubt testify, the S in my name does not stand for "serious".  I can normally be relied on to find some small vestige of humour in just about any situation.  Sadly, this cannot be said of the events of the past two weeks. So this, dear friends, is that most rare of commodities: a serious post.

I've just returned to the UK after a two-week holiday in France - a holiday which began on the day after the EU referendum result was announced, and a holiday throughout which I've constantly felt obliged to apologise for being English.  I felt distinctly uncomfortable in a country of the European Union when I came from a nation which had, only a few days earlier, voted (albeit by a narrow margin) in favour of leaving that same Union.

A few days into the holiday, I spotted a French news placard which announced that the UK had voted for Brexit and were now regretting it.  During the aftermath of the result, it gradually became apparent that a critical number of people who voted Leave had done so entirely for the wrong reasons, and were only now beginning to realise the long-term implications of what they had really voted for. 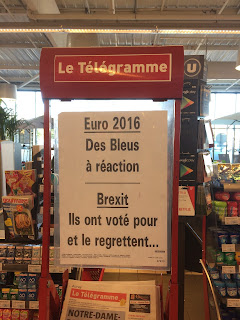 The EU referendum was not like electing a government, where mistakes made at one ballot box can be rectified a few years later at the next.  This was a once-in-a-generation decision which would have massive repercussions reaching far beyond the lifetimes of many of those who made it.  Unfortunately, media reports following the result now suggest that this message does not appear to have got through to a significant proportion of the electorate.

Some, thinking that it wouldn't affect them, failed to vote at all.  Others, convinced that Remain would win, voted Leave because they didn't think it would make any difference. Others saw their vote as nothing more than a protest vote against the government.  And others said they had voted Leave "to save the country from the Tories" - totally failing to realise that a Leave result would deliver the country straight into the hands of the xenophobic far-right.

But - and this is far more worrying - many others were taken in by what can only be described as one of the most despicable con-tricks of all time: the implication (put about by the Leave campaign) that a departure from the EU would result in a massive cash injection for the National Health Service.  The figure of £350 million, emblazoned on the side of the Vote Leave campaign bus, appeared to be convincing enough to sway a lot of previously undecided voters into voting Leave - believing that by doing so they would be helping to save the struggling NHS. 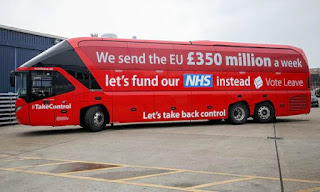 Yet within hours of the referendum result being announced, UKIP leader and key pro-Leave campaigner Nigel Farage admitted on national television that the figure was "a mistake".  In other words, a lie.

Other people, unhappy with the EU rules on free movement throughout all member states, were seduced by the premise that Brexit would halt the high level of EU immigration into the UK. Some apparently even believed that if Leave won, then UK borders would be closed immediately and all the immigrants would disappear overnight.  The days following the referendum saw a massive increase in hate crime and racist abuse.  In fact, the free movement rules will continue to apply for as long as Britain remains in the EU (and possibly even after it has left) - during which time the number of UK immigrants may well go up rather than down.

So - no cash boost for the NHS, and no halt to immigration.  It was only when these facts became public knowledge that the people of the UK realised - alas, too late - the extent to which so many of their voters had been duped.

Since then, as the country plunged into political and economic chaos, it became hideously apparent that Brexit had no post-referendum action plan.  What is even more sickening is that two of Brexit's most prominent campaigners (Boris "I'm-Not-The-Person-To-Lead-This-Country" Johnson and Nigel "My-Work-Here-Is-Done-And-I-Want-My-Life-Back" Farage) have now turned their backs on it, leaving others to deal with the monster they have created.

I'm not saying the EU is perfect - far from it.  Indeed, since the UK joined the European Economic Community (as it then was) back in 1973, the EEC has not only evolved into what is now the European Union but has also more than doubled in size - as a result of which its level of bureaucracy has increased exponentially.  And I'm quite prepared to accept that many people who voted Leave did so because, after careful consideration of the arguments for and against, they genuinely believe that the UK would be better off if we didn't belong.

Fair enough.  If I could only be sure that this was the reasoning behind each and every Leave vote, rather than an ill-considered decision based on false promises made by people who had no intention of delivering them, I think I'd have a lot less difficulty coming to terms with the outcome.

Posted by Broad Thoughts From A Home at 18:00 7 comments: