Today I have the pleasure of welcoming fellow Crooked Cat author Jennifer C Wilson.  I had the great pleasure of editing Jen's new novel, Kindred Spirits, Tower of London.  The book is officially released later this month, but you can pre-order it now by clicking here. 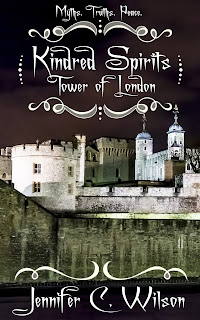 Please tell us a little about your new novel, Kindred Spirits, Tower of London. What inspired you to write this particular story?

Writing Magazine ran a competition to write a poem featuring ghosts, and I wrote a truly abysmal sonnet, about how King Richard III and Queen Anne Boleyn should be friends, given that they were both destroyed by a Henry Tudor. I never submitted the poem, but it got me thinking about how that relationship could come about, where they would meet, and who else would be in their inner circle. Then I got stuck on a train to London the long way round, and decided to start building it into a story. 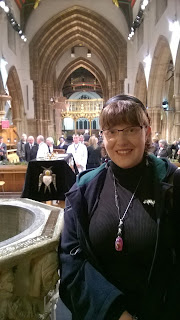 Here is Jen in Leicester Cathedral, after the service of Compline for King Richard III.  His coffin, covered with black velvet, is visible behind her.

There are a lot of ghosts in the book.  Have you ever seen a real ghost?

I think I have, when I was a child. I walked into the back garden, and saw Dad weeding the border, but when I called to him, he completely ignored me. When I called again, he answered from behind me, having walked around from the front of the house, followed by Mum. When I looked back to the border, there was nobody there. Very eerie, but apparently the housing estate is built on land which used to have market gardens on it, so it makes some sense at least. Happily, nothing scarier than a gardener.

How did you first hear about Crooked Cat Publishing, and what made you decide to submit your book to them?

I saw the announcement of an open submission window on Twitter, and decided to investigate. The books on their website looked an interesting mix, and lots that I would enjoy writing, and I was attracted by the notion of a dedicated editor to work with. I knew the novel needed some care and attention, and liked the idea of a working relationship to get it into the best shape it could be, if accepted.

What’s next for you, writing-wise?

I've started working on another Kindred Spirits tale, heading north to Scotland, and I'm really enjoying the initial research phase, finding my new cast of characters and working out how their 'lives' intertwine. What will happen to it, who knows, but it's fun going at the moment!

Now, please tell us a little about the real Jennifer C Wilson:
What do you like to do when you aren’t writing?

It's a cliché I suppose, but I love reading – I have plenty of history and historical fiction waiting for me on my Kindle. I also really enjoy making jewellery, keeping my stash of gems and findings topped up, and making pieces to go to specific events, with particular outfits etc.

I'm a bit partial to a glass of Merlot.

Monterey Bay, California. As a marine biologist, the place is unbelievable, so to visit during the famous migration period, with so many species of marine mammal visiting the area, would be incredible. Research is happening, but no idea when the real thing will!

That's difficult... I'm a worrier, and an over-thinker, and I tend to um-and-ah about things for a long time, before usually doing what first came to me! So, no specific examples really, but I wish from an early age I'd noticed this, so I could have made some of my decisions more quickly, and have saved myself an awful lot of time which could have been used for something more productive.

On a lighter note, I wish my friend Karen and I had been brave enough to say 'hello' to Ronan Keating when he walked past us after the Boyzone concert in Edinburgh. Having been fans for over twenty years, it would have been amazing, but we just let him walk on by. Still, we did meet Shane, so it wasn't an entirely wasted evening...

Thank you for being such an entertaining guest, Jen.  Please visit me again soon!
Posted by Broad Thoughts From A Home at 10:20 1 comment: