WATCH AND WAIT - an interview with Eli Carros

Today I have the great pleasure to welcome fellow-author Eli Carros, whose new novel The Watcher will be published by Crooked Cat Books on June 21st. 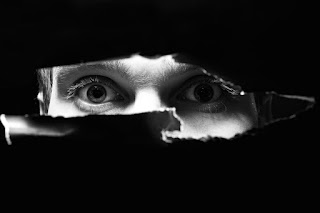 Welcome, Eli!  What prompted you to first start writing? What was the first thing you wrote?

I started telling stories long before I actually put pen to paper.  I would regale my friends with improbable tales, and tell them things like there were fairies and other magical beings at the bottom of the garden who came regularly to sneak me away to their world.  Strangely, quite often, they actually seemed to believe me.

After that I studied journalism and went into copywriting but I thought about writing a book for years and years before I actually did it.

The Watcher, my debut crime thriller, is a book about what happens when sexual obsession and emotional neglect combine to tip an individual into madness resulting in extreme, terrible, violence.

OOH, sounds exciting!  What was the inspiration for this book?

I’ve often wondered what makes a psychopath.  Someone who can derive pleasure in sadism, in hurting others, is very alien to me personally but intriguing all the same.  My fascination with psychopaths over the years has led me to study infamous serial killers, read numerous serial killer novels, and watch an unlimited amount of true crime documentaries, and psychological thrillers.  One day, a germ of a story idea came into my mind, so I marinated on it for a while, and procrastinated a lot.  Eventually I actually put fingers to keyboard and The Watcher came into being.

The book was also inspired by London, where I lived, and I drew heavily from the urban landscape.  It seems to me the anonymity of a huge metropolis like London, where everything’s moving so fast and people are used to meeting strangers, would make it the perfect place for a serial killer to conceal himself.

I did a bit pertaining to little facts about the way the police operate, but I didn’t want the book to be a standard police procedural as that’s not at all what it was intended to be.

So I gave myself lots of artistic licence, though I did a lot of research in the years leading up to writing it by making case studies of serial killers who were diagnosed with psychopathy. I did this because I was always so interested to find out what made them so different from the rest of us.

Coffee.  Lots of it, and a fair bit of procrastination checking emails, Facebook etc… Then I like to go into full gear.  I don’t write fiction every single day, but I always write something, whether I’m working on a novel or short story, an article for a blog, or a job for a copywriting client.

When I write fiction I usually lay down about 2K words a time.  Sometimes 1K a time when I’m feeling lazy. I usually aim to work on my fiction at least 5 days a week, with Sat and Sun off.  When I’m not writing, though, I’m always mulling over a story idea in my mind.  I actually find that really helps me when I do sit down and put pen to paper.

The names just seem to pop out of nowhere, I don’t consciously decide on them really.  It’s just whatever comes into my mind that seems appropriate for the character I’m writing.  Certain names just seem right somehow.

When I first started, I was firmly opposed to planning, thinking it would stifle my creativity.  Then I realized, if you don’t at least sketch out a rough outline you end up with a mess on your hands about halfway through a manuscript.  It’s much harder to plug holes once you’ve already started, so now I always make a loose chapter-by-chapter plan before I sit down to write the first chapter.

I don’t know about influenced but I greatly admire Steven King, Patricia Cornwell, Mark Billingham, Harlan Coben, and the late, great Ruth Rendell.  As you can probably tell, I’m a big fan of crime, mystery, and psychological type thriller fiction.

As for the greats of the past, I love Vladimir Nabokov for his beautiful prose, and Thomas Hardy for his ability to evoke human misery in such an utterly immersive way.  And I think William Golding’s Lord Of The Flies was the definitive study into the dark heart of human nature.  Oh and George Eliot was a genius, she totally rocks my world.  I adore the poetry of Sylvia Plath too, very earthy and sensual but at the same time, it takes you to totally different dimension in your mind that without her words you’d never have been able to access.

The best is the feeling of satisfaction when it’s done and there it is, the story you had in your mind, all there just waiting to be published.

The worst is definitely getting into a regular habit when I have a thousand other things all demanding my urgent attention.  But the thing is, if you really want to do something, you’ll find a way, and it’s amazing what you can achieve when you’re really determined to write.

Now the book is on the verge of being published, how do you feel?

The Watcher launches on June 21st and I’m ridiculously, narcissistically, excited about it.  It’s been such a long time coming to fruition (my fault) that once it’s launched and actually out there I think I’ll have to keep checking to believe it.

Is there a message for the reader? What do you hope they get from one of your books?

I hope you enjoy my book and if you enjoy crime thrillers that keep you guessing, there’s a strong possibility you might like The Watcher.  Most of all I hope it keeps you entertained and allows you to escape into another world for a while.  That’s always been the best gift all the books I’ve enjoyed have given me, so I really hope I’ve given that to my readers.

Yes, just do it.  If you want to write, and you have a novel or story idea in your head, mull over it by all means - but when that time comes and you know what you have to do, just spit it out.  You’ll feel so relieved and all cleansed and virtuous, when you’ve finally done it, like you’ve just squeezed a great big spot and lanced it of all that oozy puss.   Sorry that was a little bit gross wasn’t it?

It's certainly an interesting analogy.  I can't say I'd thought of it in those terms before, but now you come to mention it...

On a brighter note, what can we expect from you in the future?

After The Watcher launches, I’ll probably sit down and tackle that.  I’m sketching out an outline for that one at the moment, I’ve got too much on with The Watcher’s launch to properly focus on a new novel just yet, but I plan to get it written and out there by early next year.

That sounds like a plan!  Good luck with it, and thank you for coming to visit.  Please come again! 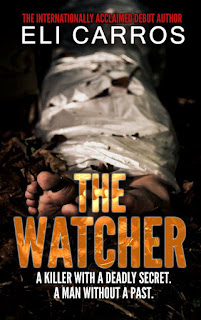 A man with a hidden past... A stalker with a deadly obsession...
The Watcher is released on June 21st from Crooked Cat Books, in ebook and paperback formats.
Find out more at https://facebook.com/elicarros or at www.elicarros.weebly.com.
Join the Online Launch Day Event on Facebook to be in with a chance of winning a £25/$25 Amazon gift card.

Posted by Broad Thoughts From A Home at 09:51