AN ACT OF LOVE - an interview with Carol Drinkwater 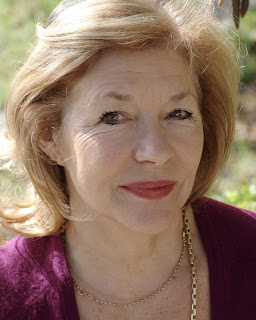 Welcome to Broad Thoughts, Carol.  What prompted you to first start writing? What was the first thing you wrote?

I have been writing since I was about eight years old. From the age of four onwards, or from any consciousness about the future and making choices, I wanted to be an actress. I then discovered words.

When I was naughty my parents used to banish me to the spare bedroom. This room had two wonders as far as I was concerned. The first was that there was a large square wooden platform that stood about five feet off the ground. This became ‘my stage, my theatre’. I could climb onto a chair and from there onto the stage where I could ‘perform’. The other gift the room gave me was that this spare room was where my father stored all his fancy dress costumes. As well as being a musician, my father also had his own theatrical agency at the back of which was his fancy dress shop. He would travel all over buying up costumes from old theatres or fancy dress shops going out of business, or wherever. He stored them in this room. It reeked of mothballs and old bits of fur. Those smells were potent to me, they held all possibilities.

So, now I had a stage and costumes, but no plays, no words. Daddy got me a huge Shakespeare jigsaw puzzle, like an enormous round plate. At its centre was Shakespeare’s head. Encircling this portrait were thirty-seven coloured images. Each was a depiction of a moment from one of Will’s plays. That jigsaw puzzle took up a large section of my stage. I skirted about it, prancing back and forth (about two steps each way!) dolled up in costumes from Daddy’s rails of clothes. I was attempting to imitate the silent figures in the jigsaw portrayals.

My next precious gift was a Complete Works of Shakespeare. My very own hefty black Bible from which I copied out words, sentences, that I did not understand. Those words were the beginning of writing for me. The seed, the keys to universes I had not yet encountered. Coxcomb, for example. What was that? I put the words in the mouths of the characters I was dressed up to represent. Even if I didn’t understand the difference between Falstaff or Mistress Quickly and Cleopatra! But those names conjured up so many ideas for me.

Then I began writing short plays or exchanges of dialogue between my newly-born characters. By the age of ten I had written a play that I produced, directed, starred in at school. This we performed at my Irish convent and then I took it on a “tour” to local old people’s homes. The residents watched on from their wheelchairs in utter bemusement!

That sounds intriguing.  I wish I'd been there to see it!

It is a Bildungsroman, a coming-of-age novel. It is also a WWII story of love and courage. One young woman’s journey from the revelation of first love, through her darkest hours, to ...  (The novel tells the rest!!) 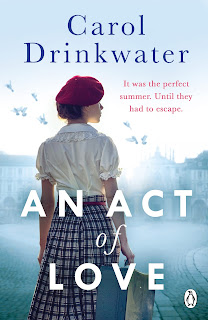 Inland of where we live on the French Riviera, the Côte d’Azur, I came across a remarkable story of a small mountain village whose inhabitants welcomed into their community almost a thousand fugitive Jews. They hid these refugees for almost a year between November 1942 to September 1943 when the Nazis arrived into this Free Zone region of France. At that point the Jewish families who had made friends, built relationships with their French hosts, were obliged to flee.

I love research, but it's a real thief of time...

A great deal of hard work!  When I am at work on a novel or novella, I usually write for about seven hours. It sleeps with me too. The characters, their journeys, their desires, disappointments and confusions. It is a twenty-four hour commitment!

Interesting question. Some characters seem to name themselves. Others I look for in local directories or I take them partially from people I have met or heard of.

I am one of those who sets out to work without knowing where I am going. The stories unfold and develop as I write. It is an exciting and sometimes terrifying process.

I know exactly what you mean.  That's happened to me too.  I've tried plotting out a novel in advance, only to find that the characters have their own ideas and take the story in a whole new direction!

So many. Well, Shakespeare as a beginning. Marguerite Duras, Isabel Allende, Graham Greene, William Boyd. Every writer I have ever read has had some tiny influence on my work, even if only for me to say "I don’t like that" or "This story doesn’t speak to me". Films, too. I am a film fanatic, and watching films is a method of comprehending and getting to grips with story-telling for me.

I filmed episodes of James Herriot’s stories for so many years that his work began to seep into me. I understood that his love of his territory and those around him gave his books a special magic. And he never wrote down to his readers. Two very important lessons for me.

Holding the finished work in my hands, talking to readers at literary festivals and other book events, sitting on a plane or train and spotting someone reading one of my books – that is all very special.

Does your new book have a message for the reader?

I don’t think in term of messages. I find such an approach too didactic for me. I aim to tell stories, to reveal the public and private journeys of my characters. The women,  mostly women,  that I am writing about move through time and space and their perception of life changes and life impacts on them. I am fascinated by the inner lives of people, their secret selves. It was one of the early attractions of becoming an actress too. Damage, passion, urges that have no brakes, cannot be held back by reason, acts that cannot be undone ... these are a few of the areas that fascinate me.

If you kill someone you cannot bring them back to life. No matter how much you regret your act. The same if you hurt someone, you can apologise if you are able to, but the damage has been done. All forms of love and violence towards others, judgements of them. These all impact on other people. Everything is on the move, interacting with everything else.

WRITE, just keep at it. There is no other way, no magic solution. No one else will write YOUR book. It comes from you and that can be both a joyous and a painfrul process, dragging it out into the open and onto the page. But it is also a WONDROUS process. It never fails to amaze  and thrill me. (PS: I should listen to my own advice more frequently!!)

Thank you, Sue, merci, for inviting me here and thank you to those of you who have given your time to read this. I hope you will read An Act of Love and it will excite you.  Cx

Thank you so much for visiting my blog today, Carol.  It has been a real honour to host you.  Please come again!

Carol Drinkwater is a multi-award-winning actress, writer and film-maker.  As an actress, she is probably best known for her portrayal of Helen Herriot in the BBC television series All Creatues Great and Small (based on the books by James Herriot).

Carol is the author of twenty-four books, both fiction and non-fiction, and has achieved bestselling status (over a million copies sold worldwide) with her quartet of memoirs set on her Olive Farm in the south of France.  Carol's fascination with the olive tree extended to a solo Mediterranean journey in search of the tree's mythical secrets.  The resulting bestselling travel books, The Olive Route and The Olive Tree, have also inspired a five-part documentary film series.

Carol's four Kindle Singles - novella-length stories commissioned by Amazon - are The Girl in Room Fourteen, Hotel Paradise, A Simple Act of Kindness and The Love of a Stranger.  They have reached the top of the charts on both sides of the Atlantic.