Today is a very special day for my dear friend and fellow-author Jennifer C Wilson, because it marks the publication of her latest work Twelve Dates 'Till Christmas, released through Ocelot Press.  She joins me on the blog to talk about the background to this amazing new venture. 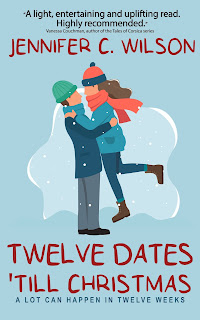 Hi Sue, and thank you for inviting me along to your blog today, to talk about Twelve Dates ‘Till Christmas, my latest release, which is out today! As you know, this is a bit of a departure for me, compared to what I usually write, but as the idea landed in my mind almost fully-formed, it seemed rude not to at least try and write it down and see how it went…

The inspiration behind Twelve Dates is an odd one, even for me. I usually get my story ideas from pottering around castles or other historical sites, and thinking about the people who have lived there before, but obviously, that’s been in short supply for the last eighteen months or so. For Twelve Dates, it all began with a night of terrible sleeplessness. I have been going through phases of TV nostalgia during the various stages of Lockdown, and back in March, I had been watching a lot of Coupling, Musketeers, and Friends (still am, in the last case). I had been struggling to sort some plot points in the historical romance I was working on at the time, and decided the best way forward might be to write something completely different for a bit, to see if I could break the cycle and become unstuck. As I said, one night, I just could not get to sleep, however hard I tried, and the characters of Lexie and Callum started chattering away. Another writing friend had also mentioned she was working on a Christmas romance novella, and everything just slotted into place. I knew straight away that they were best friends, almost inseparable, but initially, couldn’t work out whether they were a couple or not. As I started jotting down ideas though, the concept of a will-they-won’t-they / friends-to-lovers plot really started jumping out at me, and it seemed to fit perfectly for Callum and Lexie’s situation.

I also liked the idea of a “Christmas countdown”, with regular events leading up to the big day, and that’s when I thought about how quickly weekends get booked up when everyone’s working hard, especially in the run-up to Christmas, with so many parties, chances to catch up with friends etc. After that, the concept of ‘twelve weeks’ or ‘twelve dates’ came together, and I started thinking about key events, when they would be happening, and what potential fall-out would be between those events.

Within a week of that bad night, I had the skeleton sorted, and began drafting some of the scenes out, just to see if it kept working. And I was really enjoying it, so just kept going. I always knew it would be novella length, rather than a novel, and that I wanted to hear both Callum's and Lexie’s sides of the story, since there’s a lot going on for both of them. After all, that change from seeing somebody as ‘just a friend’ to sensing a growing attraction can be a time of turmoil, and I wanted to capture that.

Given that we were in the middle of Covid, I decided to set everything in October to December 2019, before any of us had really even heard of the virus, and it certainly wasn’t holding up Christmas parties or other celebrations. I know some people are tackling the pandemic in their fiction, but for me, I couldn’t quite face it. Although I think if it had been set during 2020, we would have found Callum and Lexie setting up their own little support bubble, and definitely spending even more time in each other’s pockets! Happily, in Twelve Dates, all of this is still in the future, and not troubling anyone just yet.

I really enjoyed writing Twelve Dates ‘Till Christmas, and hope people enjoy reading it just as much!

Thank you, Jen.  I hope this one flies for you!

MORE ABOUT TWELVE DATES 'TILL CHRISTMAS:

Callum and Lexie are perfect for each other - at least, that's what everyone tells them. But they're just good friends, aren't they? And neither wants to ruin the solid friendship that's treated them so well since university.

But when an old school friend of Callum's asks Lexie for a date, and passions overflow on a work night out, could it be the trigger to show each of them what they have been missing out on all this time?

With twelve weeks until Christmas, that's a lot of opportunity for romance - and for misunderstandings... 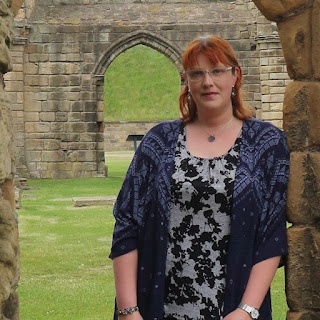 Sincere thanks to Rachel's Random Resources for the opportunity to take part in this blog tour.  Do check out the other stops on the tour - the banner below has all the details. 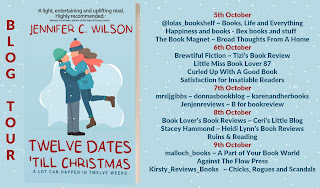 Posted by Broad Thoughts From A Home at 11:04