Today I'm delighted to welcome my friend and fellow-author Helen Matthews, whose psychological suspense novel The Girl in the Van was published yesterday by Darkstroke Books.  I had the pleasure of working with Helen as editor of this novel (not that it needed very much editing!), and I can honestly say it was one of the most gripping stories I have ever read.

Helen is an ambassador for the anti-slavery charity Unseen UK.  She has written about modern slavery and human trafficking in a previous novel, and returns to this topic in The Girl in the Van.  In this article, Helen explains why she’s passionate about raising awareness of slavery-related crimes, and why she thinks fiction has a role to play in building empathy for victims and survivors. 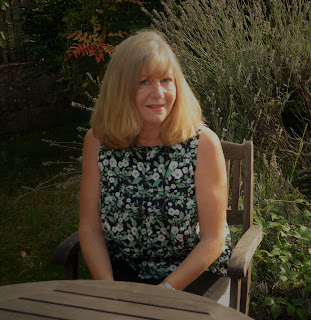 When you look at the statistics of human trafficking on an international level, it’s easy to feel overwhelmed and helpless at the sheer scale of the numbers. According to figures from the International Labour Organisation (ILO), trafficking is second only to the drug business in scale and the amount of profit it generates for criminals.

It’s thought there are almost 45.8 million slaves worldwide. Forced labour in the private economy generates US$150 billion in illegal profits each year.

This hideous crime affects not only vulnerable women and girls from impoverished parts of the world, but also men, boys and UK citizens. It takes place in our own towns, cities and rural areas, and maybe on your street or mine. For a modern slavery crime to be classed as human trafficking it needs to include an element of movement, but that doesn’t need to involve crossing international borders – it can be as simple as moving a victim from street to street. The crime I’m highlighting in The Girl in the Van is known as ‘county lines’ - about which more in a minute.

To put this in context of the bigger picture, let’s rewind and talk about trafficking more generally.

When I’m giving talks to raise money for the charity Unseen UK, audiences tell me the image that springs to their minds when they hear ‘human trafficking’ is those shocking scenes we see on TV News: flimsy inflatable boats packed with people in orange life jackets. At one time we focussed on the terrible loss of life on routes from North Africa to Italy, Malta and Spain. Now it’s on our doorstep, with boats crossing the English Channel from France to Kent.

So you might be surprised to know that according to the strict definition, this isn’t human trafficking. The unfortunate people on those boats are migrants or refugees, and they have paid for their passage. That specific crime is ‘people-smuggling’ and is an immigration crime – a crime against the state.

Human trafficking, on the other hand, is a crime against the person or individual. It’s a form of modern slavery. But people-smuggling can easily turn into human trafficking or slavery, because the passengers have put themselves at the mercy of criminals, who don’t care if they live or drown. Let’s say a man called Mahmood (we’ll give him a name because he’s human and we’re not going to talk about him as a commodity, as a smuggler would do) has paid $3,000 for the journey in one of those small boats from a Normandy beach across the English Channel. Mahmood has made himself vulnerable by relying on a callous criminal to arrange his passage. When he reaches the UK, the smuggler might say to him, "Mahmood, you’ve paid me $3,000 for your journey but that’s not enough. You should have paid $6,000 or $10,000 or whatever. So now you’re in debt, and you’ll have to work for me until this debt is paid off."

This is known as ‘debt bondage’ – another form of modern slavery. My example shows just one of the ways in which a man like Mahmood might become trapped into forced labour. In the UK, he could find himself working in a real job (say, in agriculture or a chicken factory), but he wouldn’t get paid. His earnings would be credited to the bank account of the smuggler or gangmaster who controls him. Mahmood would be told he has to work for free to pay off the debt for his travel and his accommodation in the UK. This mythical debt would grow ever-larger.

So why doesn’t Mahmood tell someone? His employer? The police? There are multiple reasons, and every case is different. It might be that he’s suffered actual violence or is threatened with abuse. The people-smuggler might be someone from his own village in Sudan, and will tell him that his elderly parents or wife or child back home will be killed if he doesn’t do as he’s ordered. Mahmood might speak poor English. He’s likely to be here illegally, though the criminals might have arranged a fake work permit, so he knows that if he goes to the police he’ll be deported. Perhaps he comes from a country where people don’t trust the police (or any authorities), and would never think of complaining to them. And so on.

My debut novel After Leaving the Village was about a young Albanian woman, Odeta, who was trafficked to the UK, on the promise of a well-paid career, by a man she thought was her boyfriend. Instead, she finds herself forced into sex work. This is a vicious kind of trafficking most of us are familiar with. That novel won first prize in its category at Winchester Writers’ Festival and was well-received by book clubs, because as well as being a gripping suspense read, there was enough discussion material to fill a whole evening.

And that’s what I want to see – people buying my books to read as page-turners and then discovering dark contemporary storylines they might not be aware of.

In my latest novel The Girl in the Van, published on 17 March 2022 by Darkstroke Books, I’m highlighting a pernicious aspect of modern slavery known as ‘county lines.’ This crime has grown rapidly in the UK in recent years - though while doing my research I discovered it’s been happening for a couple of decades.

‘County lines’ is where vulnerable children and teens are groomed by gangs, and used to carry drugs from big cities out to smaller towns or rural areas. Once lured in, it can be very hard for victims to break free. Recent survey research shows that public awareness of this crime is lower than of other forms of human trafficking and slavery, and up to a third of people have never heard of it. Sometimes parents don’t even realise their own child has been groomed because they don’t spot the signs. Around 38 per cent of parents said they wouldn’t know what to do if their child was involved. Imagine the terrible dilemma if you’re that parent.  Do you go to the police and risk your child ending up with a criminal record?

Fortunately, the Modern Slavery & Exploitation Helpline, run by Unseen, provides expert advice and operates 24/7 on this number: 08000 121 700. Another source of help is The Children’s Society. Click here for more information.

Miriana, one of the main characters in my novel The Girl in the Van, becomes homeless and without family support. She falls under the power of a drug dealer based in Croydon, south of London. He has plans to expand his territory, and forces her to carry drugs to a rundown town in South Wales. What will happen to Miriana, and how does her experience intersect with the other characters in the story? If you read my book, you’ll discover how her story unfolds.

Why would an author give away such a major plot spoiler at this stage, rather than reveal it as a twist in the story? Good question. Fortunately this isn’t the only storyline in the novel, which encompasses family relationships, secrets, violence, loss, grief, danger and recovery. Miriana’s story is integral to the plot, but there are several others. Either way, it’s important to me to catch readers’ attention and show them the desolation of a young person who finds herself exploited, and what might happen next. As I mentioned earlier, it isn’t only unfortunate people from impoverished or war-torn countries who are impacted. It could happen to someone you know, perhaps even someone in your family. Revealing it here is part of my mission to make more people aware of ‘county lines’ and other kinds of modern slavery.

The Girl in the Van is out now in eBook and paperback.  You can order your copy by clicking here. 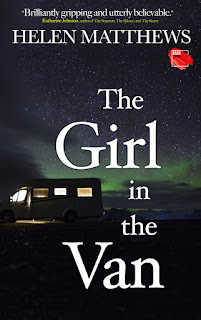 MORE ABOUT THE GIRL IN THE VAN:

A tormented mother.  An abandoned girl.  A deadly game of survival.

What happened to Ellie?

Traumatised by events, Ellie's mother Laura can't bear to stay in the Welsh seaside town where she lives with her partner Gareth.  She escapes to London, breaking all ties with him and refusing to tell anyone her new address.

After two years of living alone and working in a mundane job, Laura buys an old campervan and joins a singles holiday.  Here she meets Miriana, a teenage girl who bears a chilling resemblance to Ellie.  As Laura uncovers Miriana's story, she's shocked by the parallels to her own life.

But stories can be dangerous, and someone out there will stop at nothing to prevent the truth about Ellie from coming out...

Helen Matthews writes page-turning psychological suspense novels and is fascinated by the darker side of human nature and how a life can change in an instant.  Her latest novel The Girl in the Van was published on 17 March 2022 by Darkstroke Books.  Previous novels include suspense thriller After Leaving the Village, which won first prize in the Opening Pages Category at Winchester Writers' Festival.  This was followed by Lies Behind the Ruin, a domestic noir set in France, published by Hashtag Press.  Her third novel Façade was published by Darkstroke Books in 2020.

Born in Cardiff, Helen read English at the University of Liverpool and worked in international development, consultancy, human resources and pensions management.  She fled corporate life to work freelance while studying for a Creative Writing MA at Oxford Brookes University.  Her stories and flash fiction have been shortlisted and published by Flas 500, 1000K Story, Reflex Press, Artificium and Love Sunday Magazine.

She is a keen cyclist, covering long distances if there aren't any hills, sings in a choir, and once appeared on stage at Carnegie Hall, New York, in a multi-choir performance.  She loves spending time in France.  Helen is an ambassador for the charity Unseen, which works towards a world without slavery, and donates her author talk fees and a percentage of her royalties to the charity.

Find out more at:

Posted by Broad Thoughts From A Home at 09:41